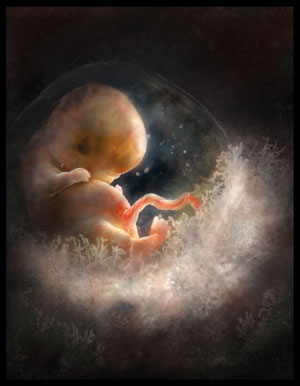 A human fetus in the womb with the placenta at the bottom providing nutrients and oxygen to the fetus. RIKEN researchers have identified the importance of a protein called small neutral amino-acid transporter 4 (SNAT4) in the early development of mouse embryos. © SINGLECELL ANIMATION LLC/SCIENCE PHOTO LIBRARY

RIKEN researchers have determined how a protein that transports essential amino acids across the placenta contributes to normal embryonic development in mammals1.

The placenta provides a supportive environment for developing mammalian fetuses. One of its most important roles is to supply nutrients, including amino acids, from the mother. But the molecular mechanisms behind the supply of amino acids are not well understood.

Now, a team led by Atsuo Ogura of the RIKEN BioResource Research Center has conducted a genetic study that explores the roles amino-acid transporters in the placenta play in development. Their major interest is cloning mammalian cells known as somatic cell nuclear transfer (SCNT), which offers tremendous potential for producing livestock with useful genetic traits, generating animal models for disease, and reproductive medicine.

A dragnet search for abnormally regulated genes in the placentas of these cloned embryos led the researchers to small neutral amino-acid transporter 4 (SNAT4), which belongs to a larger family of proteins that facilitate the delivery of a variety of amino acids. Ogura and Matoba made a series of genetic manipulations to better understand this protein’s importance in early development of mouse embryos.

Atsuo Ogura (seventh from the left) and his team have identified a placental protein that may affect cloning efficiency. © 2019 RIKEN

After confirming that SNAT4 is specifically expressed in the healthy placenta, the researchers used the CRISPR–Cas9 gene-editing technology to generate mouse embryos that were deficient in SNAT4. The resulting pups were severely underweight, and only 28% were alive two weeks after delivery.

The researchers then bred SNAT-4-deficient males with normal females, and found that the resulting pregnancies still yielded severely underweight embryos with equally underdeveloped placentas. These changes were associated with reduced amino-acid levels in the circulation of fetal mice, hinting at a likely cause for this impaired development.

Since SNAT4 is strikingly overexpressed in SCNT-generated embryos, this could potentially explain the abnormally large placentas observed in this context.

These results also have implications for normal human reproduction. “The SNAT4-knockout mice showed phenotypes similar to those seen in intrauterine growth retardation,” says Matoba, referring to a developmental abnormality that can potentially lead to miscarriage. “These animals could be a valuable model for studying the mechanisms of this phenomenon in mammals—including humans.”

Matoba intends to investigate further how amino-acid transporters shape normal fetal development by knocking out other SNAT-encoding genes alongside SNAT4. He also wants to explore SNAT4’s function in non-placental tissues such as the liver.