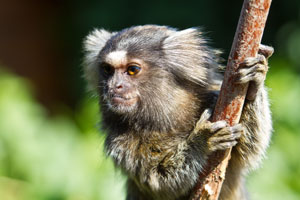 RIKEN researchers can cause marmosets to move their forelimbs in response to optical stimulation. © s0ulsurfing - Jason Swain/ Getty

RIKEN neuroscientists have succeeded in getting marmosets to move their forelimbs when they shine laser light on the motor cortex—the brain region responsible for planning, conducting and controlling voluntary movements1. This will help researchers discover what different circuits in the motor cortex of marmosets do, with a view to gaining valuable insights into equivalent circuits in the human brain.

Researchers use light to stimulate specific neurons in the brain, allowing them to probe the brain and discover what different neural circuits do. This technique has been widely used on mice, but scientists are keen to apply it to primates because their brains more closely resemble human brains.

Researchers have used optical stimulation to get mice to move their front and rear paws, but until now no one has managed to achieve the same thing in primates. Indeed, it was proving so challenging that some prominent neurobiologists had speculated that it was not possible.

Now, after more than three years of trying, Masanori Matsuzaki at the RIKEN Center for Brain Science and co-workers have succeeded where many have failed. They have developed a low invasive way to cause marmosets to move their forelimbs in an almost puppet-like manner in response to laser light illumination.

The researchers improved the standard technique for optical stimulation of brain areas. Importantly, they used young marmosets, rather than larger moneys. “The marmoset brain is about ten times smaller than the macaque brain, which means that forelimb movement in marmosets should be controlled by fewer motor cortical neurons.”

Also, instead of inserting an optical fiber into the brain, which is invasive and can only illuminate a small area, the team installed a transparent window in the scalp and shone the laser light through it. This allowed them to stimulate a much larger area. “An optical fiber can only illuminate an area that is about half a millimeter in diameter, whereas our technique could realize diameters that are two to four times larger than that,” says Matsuzaki. “Furthermore, by moving the fiber, we can easily change the illumination area to cause different forelimb movements.”

In addition to directly controlling the forelimbs of marmosets, the researchers were able to modify a movement that a monkey was in the process of making by shining a lower intensity light. The secret to this part of the experiment was the methods that the team had developed for training marmosets to perform tasks with their forelimbs. “So far, only our lab can train marmosets to perform such tasks,” Matsuzaki comments.

In the long term, the knowledge gained by the technique could help researchers gain a better understanding of how the motor cortex in the human brain responds to injury and stroke.