A response to light usually seen only in inorganic compounds has been realized in organic liquid crystals, opening the way to highly responsive photodetectors 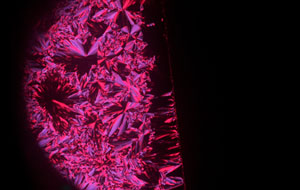 Figure 1: A polarized optical microscopy image of the columnar liquid crystals sandwiched between two crossed polarizers with (right) and without (left) an electric field. This suggests that applying an electric field breaks the symmetry of the liquid crystals. Reprinted (adapted), with permission, from Ref. 1. Copyright (2020) American Chemical Society.

A column of liquid crystal molecules could form the basis of a new breed of flexible light detectors that have ultrafast responses, an all-RIKEN team has demonstrated1.

Conventional solar cells and light detectors are based on the photovoltaic effect—a phenomenon in which light generates conduction electrons and their positive counterparts, holes, in a semiconductor. They consist of a material that donates electrons and a material that accepts them. Electrons and holes are pulled apart at the interface, resulting in the generation of an electric current.

But another effect, known as the bulk photovoltaic effect, can generate a current by using just one kind of material. It also responds very rapidly to light and generates a highly constant current. These advantages could lead to a new generation of solar cells and light detectors.

“The bulk photovoltaic effect is observed only in polar, non-centrosymmetric materials, but organic materials tend to preferentially form non-polar, centrosymmetric crystals,” explains Daigo Miyajima of the RIKEN Center for Emergent Matter Science. “Hence, we had to find a way to break this symmetry.”

Previously, Miyajima and some co-workers had made a liquid-crystal column consisting of fan-shaped molecules stacked on top of each other in which the symmetry was broken by hydrogen bonds between amide groups. But it absorbed light only in the ultraviolet range.

Now, by tinkering with the composition of the base molecule of this organic liquid crystal, the researchers have succeeded in observing the bulk photovoltaic effect in the columnar liquid crystal over a wide wavelength range, which reaches up to red wavelengths in the visible spectrum.

Although the molecules spontaneously form symmetric assemblies, the researchers demonstrated that the symmetry can be broken by simply applying an electric field (Fig. 1). They found that under this condition the current in the liquid crystal jumped by about 6,600 times when light was shone on it. This is similar to the response of light detectors based on the conventional photovoltaic effect, but it could be realized in a device that has a much simpler structure.

The team is now trying to make devices on flexible substrates. “Because our material is a liquid crystal, it is tolerant to bending or stretching,” Miyajima notes.