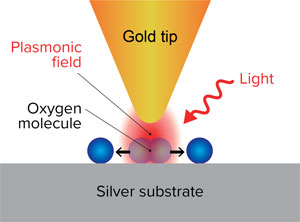 Figure 1: Chemists at RIKEN have discovered how plasmons generated by shining light at the gap between a gold tip and a silver surface and can break the bonds of oxygen molecules adsorbed on the surface.© 2020 RIKEN Surface and Interface Science Laboratory

Chemists at RIKEN have discovered why shining light on silver nanoparticles causes oxygen molecules attached to their surfaces to break off1. This insight will help researchers to design new catalysts that harness light energy.

When metal nanoparticles are illuminated by light, molecules attached to them react faster than usual or participate in reactions they would not normally undergo. Such light-driven reactions are a promising way to convert sunlight into chemical energy, but their application is being held back due to the fact that no one is exactly sure how they occur.

What is known is that shining light at a metal nanoparticle excites the conduction electrons in the metal, causing them to dance in sync with each other. These localized surface plasmons, as they are called, intensify the electric field close to the nanoparticle. A few femtoseconds later (one femtosecond = 10−15 second), an energetic (‘hot’) electron and a hole (a missing electron) form in the nanoparticle. Finally, the plasmon decays, releasing heat.

Because this series of events occurs very rapidly on a tiny scale, it is extremely difficult to determine which aspect—the enhanced electric field of the surface plasmon, the hot electrons and holes, or the heat—plays the biggest role in a particular light-induced reaction.

Now, Emiko Kazuma at the RIKEN Surface and Interface Science Laboratory and her co-workers have shown that, in the case of oxygen molecules adsorbed on silver surfaces, the critical factor is the hot electrons and holes, with the holes contributing much more than the electrons. Linked to this, they found that the electronic structure of the adsorbed molecule is one of the most important factors in determining the reaction mechanism.

To make these findings, the team used a scanning tunneling microscope (STM) to both image single oxygen molecules on the silver surfaces and induce the reaction by exciting a surface plasmon at the gap between the silver surface and a gold STM tip with light irradiation (Fig. 1). The ability to image single molecules was crucial to their success. “Virtually all the groups working in the area of plasmonic reactions are using macroscopic techniques such as gas chromatography and infrared spectroscopy that measure averaged parameters,” says Kazuma. “But because plasmons are strongly localized near the metal surface, we wanted to visualize the reaction in that tiny area to uncover the mechanism.”

The team intends to use their findings to manipulate the reaction pathway. “So far, our studies have focused on revealing the reaction mechanism, but in the next step we will try to control the reaction tuning the electronic structure of the adsorbed molecule,” says Kazuma.