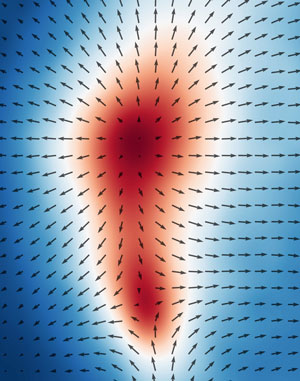 Physicists at RIKEN have found a novel way to create tiny magnetic swirls known as skyrmions in a magnetic film1. Their method, which uses sound waves, promises to be more energy efficient than conventional methods and will help open the way to develop energy-saving memory devices.

It has only been about a decade since skyrmions were first observed in experiments, but research into them has exploded since then. Typically just several nanometers in diameter, skyrmions are highly stable and can be shunted around using extremely low electrical currents. All of this makes them ideal for realizing highly energy efficient data-storage devices that are smaller and faster than current devices.

Skyrmions are usually created by applying a short electrical pulse to a thin magnetic film, but the high current densities involved can cause heating, which squanders energy. “To realize energy-saving skyrmion-based devices, we need to find an efficient method to create skyrmions,” says Tomoyuki Yokouchi of the RIKEN Center for Emergent Matter Science (CEMS). “Current pulses can form skyrmions but require sizeable current density, which is likely to cause significant heating. Hence, we need to find another way that doesn’t cause heating.”

Now, Yokouchi and colleague Yoshichika Otani, also at CEMS, and their co-workers have created skyrmions in a magnetic film by applying a special sound wave that travels on the surface of the film. The sound wave causes the atoms in the films to move, which in turn induces changes in the direction of the electron spins.

This method causes much less heating than applying an electrical pulse. It also has the advantage of being able to generate multiple skyrmions over a wide area. In contrast, electrical currents can only create skyrmions in specific narrow regions on a film.

To discover more about how the skyrmions were being made, the team performed a computer simulation. They found that two skyrmions actually form—a skyrmion and an anti-skyrmion (Fig. 1)—but the anti-skyrmion then disappears because it is less stable. “This is analogous to the creation of a particle and its antiparticle in particle physics,” says Yokouchi. “We were surprised that the creation process of skyrmions by sound waves included such a step.”

The team is now performing experiments to find out how fast skyrmions form by this process. They are also investigating whether sound waves can be used to move skyrmions around in the film. “We hope this work will deepen the basic science of skyrmion physics and contribute to the development of next-generation, energy-saving memory devices that are based on skyrmions,” says Otani.