Last year, Google produced a 53-qubit quantum computer that could perform a specific calculation significantly faster than the world’s fastest supercomputer. Like most of today’s largest quantum computers, this system boasts tens of qubits—the quantum counterparts to bits, which encode information in conventional computers.

To make larger and more useful systems, most of today’s prototypes will have to overcome the challenges of stability and scalability. The latter will require increasing the density of signaling and wiring, which is hard to do without degrading the system’s stability. I believe a new circuit-wiring scheme developed over the last three years by RIKEN’s Superconducting Quantum Electronics Research Team, in collaboration with other institutes, opens the door to scaling up to 100 or more qubits within the next decade. Here, I discuss how. 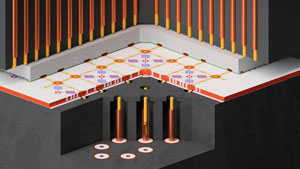 This schematic image of integrated superconducting qubits and their packaging,shows the qubits as green dots with rings, which are laid out on top of a silicon chip (in red). A number of holes through the chip electrically connect the top and bottom surfaces. The blue wires on top are circuit elements for the readout of the qubits. Coaxial wiring (with gold-plated springloaded pins) is connected to the backside of the chip, and these control and read the qubits. © Yutaka Tabuchi

Quantum computers process information using delicate and complex interactions based on the principles of quantum mechanics. To explain this further we must understand qubits. A quantum computer is built from individual qubits, which are analogous to the binary bits used in conventional computers. But instead of the zero or one binary states of a bit, a qubit needs to maintain a very fragile quantum state. Rather than just being zero or one, qubits can also be in a state called a superposition—where they are sort of in a state of both zero and one at the same time. This allows quantum computers based on qubits to process data in parallel for each possible logical state, zero or one, and they can thus perform more efficient, and thus faster, calculations than conventional computers based on bits for particular types of problems.

However, it is much harder to create a qubit than a conventional bit, and full control over the quantum-mechanical behavior of a circuit is needed. Scientists have come up with a few ways to do this with some reliability. At RIKEN, a superconducting circuit with an element called a Josephson junction is used to create a useful quantum-mechanical effect. In this way, qubits can now be produced reliably and repeatedly with nanofabrication techniques commonly used in the semiconductor industry.

The challenge of scalability arises from the fact that each qubit then needs wiring and connections that produce controls and readouts with minimal crosstalk. As we moved past tiny two-by-two or four-by-four arrays of qubits, we have realized just how densely the associated wiring can be packed, and we’ve had to create better systems and fabrication methods to avoid getting our wires crossed, literally.

At RIKEN, we have built a four-by-four array of qubits using our own wiring scheme, where the connections to each qubit are made vertically from the backside of a chip, rather than a separate ‘flip chip’ interface used by other groups that brings the wiring pads to the edges of a quantum chip. This involves some sophisticated fabrication with a dense array of superconducting vias (electrical connections) through a silicon chip, but it should allow us to scale up to much larger devices. Our team is working toward a 64-qubit device, which we hope to have within the next three years. This will be followed by a 100-qubit device in another five years as part of a nationally funded research program. This platform should ultimately allow up to a 1,000 qubits to be integrated on a single chip.

The other major challenge for quantum computers is how to deal with the intrinsic vulnerability of the qubits to fluctuations or noise from outside forces such as temperature. For a qubit to function, it needs to be maintained in a state of quantum superposition, or ‘quantum coherence’. In the early days of superconducting qubits, we could make this state last for just nanoseconds. Now, by cooling quantum computers to cryogenic temperatures and creating several other environmental controls, we can maintain coherence for up to 100 microseconds. A few hundred microseconds would allow us to perform a few thousand information processing operations, on average, before coherence is lost.

In theory, one way we could deal with instability is to use quantum error correction, where we exploit several physical qubits to encode a single ‘logical qubit’, and apply an error correction protocol that can diagnose and fix errors to protect the logical qubit. But realizing this is still far off for many reasons, not the least of which is the problem of scalability.

since the 1990s, before quantum computing became a big thing. When I began, I was interested in whether my team could create and measure quantum superposition states within electric circuits. At the time, it wasn’t at all obvious if electric circuits as a whole could behave quantum mechanically. To realize a stable qubit in a circuit and create switch-on and -off states in the circuit, the circuit also needed to be capable of supporting a superposition state.

We eventually came up with the idea of using a superconducting circuit. The superconducting state is free of all electrical resistance and losses, and so it is streamlined to respond to small quantum-mechanical effects. To test this circuit, we used a microscale superconducting island made of aluminum, which was connected to a larger superconducting ground electrode via a Josephson junction—a junction separated by a nanometer-thick insulating barrier—and we trapped superconducting electron pairs that tunneled across the junction. Because of the smallness of the aluminum island, it could accommodate at most one excess pair due to an effect known as Coulomb blockade between negatively charged pairs. The states of zero or one excess pairs in the island can be used as the state of a qubit. The quantum-mechanical tunneling maintains the qubit’s coherence and allows us to create a superposition of the states, which is fully controlled with microwave pulses.

Because of their very delicate nature, quantum computers are unlikely to be in homes in the near future. However, recognizing the huge benefits of research-oriented quantum computers, industrial giants such as Google and IBM, as well as many start-up companies and academic institutes around the world, are increasingly investing in research.

A commercial quantum-computing platform with full error correction is probably still more than a decade away, but state-of-the-art technical developments are already bringing about the possibility of new science and applications. Smaller scale quantum circuits already perform useful tasks in the lab.

For example, we use our superconducting quantum-circuit platform in combination with other quantum-mechanical systems. This hybrid quantum system allows us to measure a single quantum reaction within collective excitations—be it precessions of electron spins in a magnet, crystal lattice vibrations in a substrate, or electromagnetic fields in a circuit—with unprecedented sensitivity. These measurements should advance our understanding of quantum physics, and with it quantum computing. Our system is also sensitive enough to measure a single photon at microwave frequencies, whose energy is about five orders of magnitude lower than that of a visible-light photon, without absorbing or destroying it. The hope is that this will serve as a building block for quantum networks connecting distant qubit modules, among other things.

Interfacing a superconducting quantum computer to an optical quantum communication network is another future challenge for our hybrid system. This would be developed in anticipation of a future that includes a quantum internet connected by optical wiring reminiscent of today’s internet. However, even a single photon of infrared light at a telecommunication wavelength cannot directly hit a superconducting qubit without disturbing the quantum information, so careful design is a must. We are currently investigating hybrid quantum systems that transduce quantum signals from a superconducting qubit to an infrared photon, and vice versa, via other quantum systems, such as one that involves a tiny acoustic oscillator.

Although many complex issues need to be overcome, scientists can see a future enhanced by quantum computers on the horizon. In fact, quantum science is already in our hands every day. Transistors and laser diodes would have never been invented without a proper understanding of the properties of electrons in semiconductors, which is totally based on understanding quantum mechanics. So through smart phones and the internet, we are already totally reliant on quantum mechanics, and we will only become more so in the future. 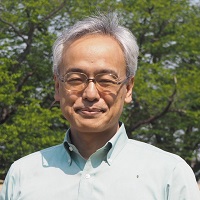 Since 2014, Yasunobu Nakamura has been a principal investigator and team leader of the Superconducting Quantum Electronics Research Team at the RIKEN Center for Emergent Matter Science (CEMS). He is also a professor at the University of Tokyo. Until 2012, he worked for NEC Corporation. Nakamura was a Thomson Reuters Highly Cited Researcher in 2014 and was named as one of the world’s top innovators in the MIT Technology Review magazine in 2003. He has also been awarded the Sir Martin Wood Prize (1999), Nishina Memorial Prize (1999), Agilent Technologies Europhysics Prize (2004), Simon Memorial Prize (2008), Leo Esaki Prize (2014), JSAP Outstanding Achievement Award (2018).