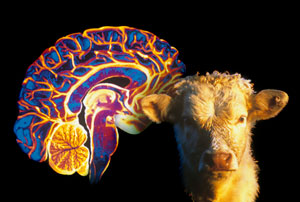 Figure 1: A new variant of Creutzfeldt–Jakob disease (CJD) is caused by a prion infection from cows to humans. RIKEN researchers have found that the ability of a yeast prion protein to cross species depends on the shape of a short section in the monomeric protein.© GJLP/ CNRI/ SCIENCE PHOTO LIBRARY

A short segment of an infectious protein known as a prion protein plays a crucial role in determining how susceptible the protein is to interspecies prion transmission, RIKEN researchers have discovered in a yeast study1. This finding has important implications for neurodegenerative diseases in humans.

Infectious diseases are usually spread by living pathogens such as fungi and bacteria or by genetic material encased in protein shells (viruses). But proteins that are identical to functional ones found in our brains but misfolded into aggregates can cause fatal infections in people by inducing correctly folded proteins to switch configuration into an abnormal form. While relatively rare, such prion infections have no cure and are always fatal.

Remarkably, such prion infection can happen between different species. The best known example of this observation is a variant of Creutzfeldt–Jakob disease (CJD) that can be caused by eating meat from cows with ‘mad cow disease’.

Scientists would like to understand more about what properties of the monomeric prion protein increase its ability to cross species, but it is challenging to investigate because the transmission efficiency is quite low. “If, say, the cross-species transmission efficiency is less than 0.1%, you’d need somewhere between 1,000 and 10,000 mice to get meaningful statistics for just one experiment, which is almost impossible,” explains Motomasa Tanaka of the RIKEN Center for Brain Science. 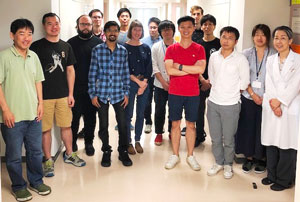 Motomasa Tanaka (far left) and his team have found that a short disordered protein segment regulates the cross-species transmission of a yeast prion.© 2020 RIKEN

To overcome this problem, Tanaka, Toshinobu Shida and their co-workers have turned to prions that infect yeast. “In yeast systems, we can easily screen prions crossing species barriers in thousands of colonies in just one day,” says Tanaka. “That’s a huge advantage.”

By using two distantly related yeast prion proteins from different yeast species, the team discovered that a change in the shape of a short segment of a monomeric protein can substantially affect how easily prions can jump species. Remarkably, the difference of only one methylene group (CH2) in this region of the monomeric yeast prion protein can alter its dynamics and hence how easily it can react with prions from different species. “That came as a very big surprise to us,” says Tanaka.

The result provides a fresh perspective for studying human neurodegenerative diseases such as Alzheimer’s and Parkinson’s diseases. “Many researchers have been focusing on amyloid structure because amyloids can cause functional monomeric proteins to become dysfunctional by recruiting them into aggregates,” says Tanaka. “Our study provides a novel viewpoint, namely that dynamic fluctuations in the structure of monomeric proteins are also critical.”