Meet the region of the brain that may control your consciousness

The revelation that a small part of the brain, known as the claustrum, can silence cortical neurons and induce the slow-wave activity in mice could unlock new understandings of the brain’s higher functions. 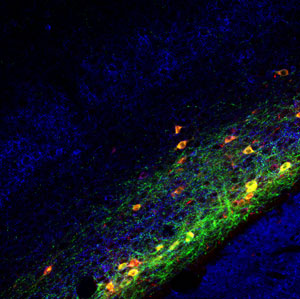 For such a wispy, diminutive region of the brain, the claustrum has been the subject of some audacious speculation. The most remarkable came from Francis Crick, of DNA double-helix fame, and renowned neuroscientist Christof Koch: they speculated that the claustrum, which is located deep within the brain structure, might be the seat of consciousness, likening it to a conductor of an orchestra. This theory had never been proven. But now, a mouse study by an all-RIKEN team of neuroscientists has shown that the pair was partly right.

The study observed that optogenetic (light) activation of the claustrum silenced neurons in the brain’s cortex, the outer ‘grey matter’ part of the brain linked to many higher functions. Moreover, this silencing is characteristic of the brain’s slow waves that occur in deep sleep just before rapid-eye-movement (REM)sleep. These waves have been linked to brain-wide synaptic homeostasis and memory consolidation.

The name claustrum derives from the Latin word for a locked or enclosed place. It’s an appropriate name, because while neuroscientists have known about the claustrum for a long time (as a brain region hidden beneath the cerebral cortex) they have been unable to pin down its role. Its wispy, nebulous structure makes it difficult to access and manipulate.

Although the claustrum’s function remained elusive, researchers had been able to determine its structure. They found that it has a characteristic ‘crown of thorns’ structure that makes connections with almost all areas in the neocortex, the area of the brain responsible for a diverse range of functions, including sensory perception and cognition.

Yoshihiro Yoshihara of the RIKEN Center for Brain Science never set out to investigate the claustrum; rather he stumbled upon it while he and his team were studying the neuroscience of smell. This research involved genetically manipulating mice so that certain neurons along the olfactory circuit that initially processes smell signals from the nose can be visualized and activated by light.

After poring over images of the mice’s brains and consulting a brain atlas, Yoshihara came to a startling realization—the transgene was expressed only in the claustrum. “I told the technician, ‘Whatever you do, don’t discard that line! It could be a vitally important resource for neuroscience.’”

Silence in the cortex 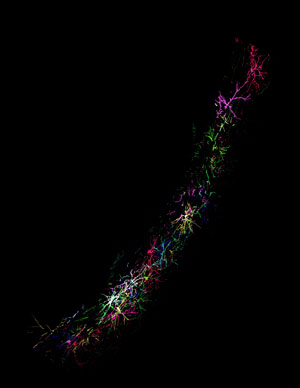 Sleeping beauty: Activation of neurons in a small region buried deep within the brain called the claustrum (pictured) induces a silence in cortical neurons characteristic of the slow waves of deep sleep. Claustrum neurons make connections with almost all areas of the neocortex. But rather than activating neurons, as some researchers theorized, the claustrum appears to deactivate neurons. The neurons pictured are expressing Cre recombinase and were genetically labeled with fluorescent proteins using a Brainbow technique. © 2020 RIKEN Center for Brain Science

This line of mice provided Yoshihara’s team with the key for unlocking the claustrum, since for the first time they could genetically visualize, activate and ablate (remove) neurons in the claustrum alone.

They were surprised when they tried optogenetic activation. “When we activated claustrum neurons by light, we observed total silencing of cortical neurons for more than a tenth of a second—a very long period,” says Yoshihara. “I was very excited when I saw the data and felt we had probably found a very important and interesting result for neuroscience.”

The extended period of silence is a characteristic of slow waves in the brain, which occur during the deep sleep that precedes rapid-eye-movement sleep. Thus, the observation that exciting neurons in the claustrum induces silences was clear evidence that the claustrum is responsible for coordinating slow-wave activity in the cortex.

“The critical finding is that the claustrum coordinates cortical activity very broadly in widespread areas—and that’s something that only claustrum neurons can do,” says Yoshihara. “This is highly significant not only for sleep research but also for research into higher brain functions.”

From mice to human

While the finding was made in mice, there is at least some anecdotal evidence that the claustrum may play a similar role in humans. A doctor was treating an epilepsy patient by using an electrode between the left claustrum and the insular cortex to stimulate the claustrum. Prior to the stimulation, the patient was reading a book, but following it she stopped reading and did not respond to anything, only regaining consciousness when the stimulation stopped.

Yoshihara hopes that his team’s finding will stimulate fresh interest in the under-studied brain region. “I hope clinical researchers will pay attention to the claustrum,” he says. One reason for its neglect is that until now functional magnetic resonance imaging (fMRI) systems have lacked the resolution to image it in much detail. But Yoshihara notes that this is changing and that RIKEN will be acquiring an fMRI system next year that will be able to image the claustrum in great detail.

Looking ahead, Yoshihara’s team intends to pursue two directions. One involves new mouse lines. In the first mouse line produced, only about one third of the neurons in the claustrum were made able to be genetically manipulated, but the team has since produced two more mouse lines that together cover most of the remaining populations of the claustrum. This will allow them to investigate both the role of the claustrum as a whole and the functions that the three different neuron populations perform. The team also plans to see what role the claustrum plays in memory acquisition and consolidation. 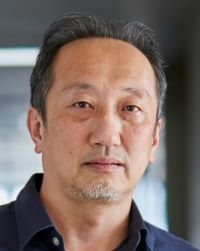 Yoshihiro Yoshihara is the Team Leader of the Laboratory for Systems Molecular Ethology at the RIKEN Center for Brain Science (CBS). He received his Ph.D. from the Faculty of Pharmaceutical Sciences at Kyoto University in 1989. He then moved to the Osaka Bioscience Institute and Osaka Medical College where he started looking at the olfactory system with Kensaku Mori. He launched his own laboratory at the RIKEN Brain Science Institute in 1998. His lab at RIKEN CBS now focuses on two main research topics: olfaction and consciousness. He has received a Young Investigator Award (2006) and Grand Prize (2019) from The Japanese Association for the Study of Taste and Smell, as well as an Ando Momofuku Award (2018).