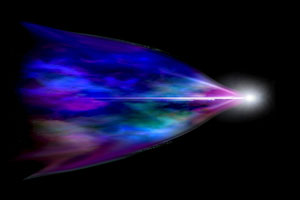 The speed of light is not the only fundamental limitation, at least not in quantum systems, a RIKEN physicist and his collaborator have shown1. The mathematical proof could have implications for the development of algorithms used in quantum computation and quantum machine learning.

Einstein’s theory of special relativity imposes a speed limit on the Universe—information cannot travel faster than the speed of light. Relativistic systems—those with particles moving at velocities approaching this limit—exhibit a wide range of weird effects not seen in our everyday, non-relativistic experience. But do non-relativistic systems also have an information speed limit? Classical mechanics says no, but does quantum mechanics define one?

Two theoretical physicists, Elliott Lieb and Derek Robinson, investigated this question in the early 1970s. They considered a lattice of particles with a quantum property known as spin: each spin in the lattice interacts strongly with the next. By mathematically imposing a theoretical upper limit on the speed at which information can propagate in non-relativistic quantum systems, Lieb and Robinson showed that information cannot travel instantaneously, even in quantum theory.

But as is often the way in physics, an answer raised more questions: what happens if the quantum particles interact over longer distances and not just their nearest neighbors in the lattice?”

Now, almost half a century after Lieb and Robinson’s work, another pair of theoretical physicists—Tomotaka Kuwahara from the RIKEN Center for Advanced Intelligence Project and Keiji Saito from Keio University—has shown that there is indeed a limit even for quantum systems with such long-range interactions.

Kuwahara and Saito have now shown mathematically that for a D-dimensional system of particles whose interaction strength decreases over distance to the power of –α, a linear light cone exists so long as α is greater than 2D+1.

The pair’s theoretical finding could have practical implications. “This regime includes various practically important long-range interacting systems that can be created using trapped ions, Rydberg atoms, or ultracold atoms and molecules,” says Kuwahara. “The concept of the light cone is also deeply related to the implementation of faster quantum algorithms by quantum computers.”