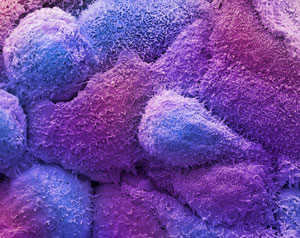 Drugs that are activated inside the body with catalytic quantities of gold could offer a new option for treating cancer and other diseases, four RIKEN researchers have shown1.

Using metals to convert masked ‘prodrugs’ into their active forms inside the body is an emerging area of biomedical research. These drug-release reactions are designed to be triggered by metals that are not naturally present in the body, providing a new way to trigger drug release that promises to increase the efficacy and reduce the side effects of a therapy.

“Research groups worldwide have done a lot of beautiful work showing that transition metals like ruthenium and palladium can be used in biological settings to catalyze the unmasking of drugs,” says Katsunori Tanaka, who leads the RIKEN Biofunctional Synthetic Chemistry Laboratory. In many clinical scenarios, however, it may be useful to deploy several masked drugs in tandem, each triggered using a different metal. “We identified a lack of studies focusing on gold, and so we set out to tackle this unique challenge,” Tanaka says.

Many active drugs contain nitrogen-based amine functional groups, so Tanaka, Kenward Vong and their colleagues developed 2-alkynylbenzamide (Ayba), an amine-masking group that would be clipped off in the presence of gold. Ayba features a triple-bonded carbon–carbon alkyne group that, when activated by gold, triggers a cyclization reaction that ultimately cleaves the bond between Ayba and the masked nitrogen atom, releasing the active drug.

In testing, the team used Ayba to create prodrugs of two amine-containing anticancer compounds. Adding gold to these prodrugs in cancer cells released the active drug to kill the cells, the team showed. Other metals did not trigger the unmasking reaction, and the Ayba-protected drugs could be used in tandem with prodrugs released by ruthenium and palladium. “We believe Ayba-based prodrugs performed with a lot of promise,” Tanaka says.

Another advantage of the Ayba prodrug platform was that it could be easily modified. The researchers added various chemical side chains to the Ayba structure, enabling them to fine-tune the overall properties of the prodrug, such as its inability to cross cell membranes. “Having the ability to make derivatives makes the Ayba group much more functional than other approaches,” Tanaka says.

“We hope this work gives us the chance to start collaborations and to look for specific systems where our chemistry can benefit the most,” Tanaka adds. “Our end goal is to work towards developing novel therapeutic applications.”