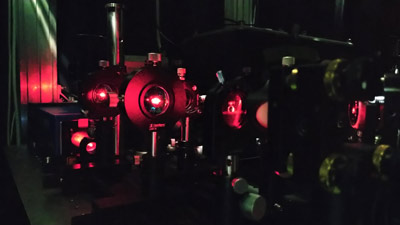 In an advance that promises to facilitate research into stem cells and regenerative medicine, a RIKEN-led team has demonstrated a non-invasive method for tracking the chemical changes that accompany the reprogramming of somatic cells into stem cells1.

Pluripotent stem cells are unique in that they have the ability to give rise to all the cell types present in an adult organism, making them promising for new therapies based on regenerative medicine. They come in two varieties: embryonic stem cells, which are naturally present in the developing embryo, and induced pluripotent stem cells (iPSCs), which are produced by artificially reprogramming normal cells in the adult body using biochemical interventions.

To gain a better understanding of the cell dynamics during the reprogramming to produce iPSCs, it is vital to monitor the complex chemical changes occurring inside the cells. Conventional techniques for estimating cell quality and the progression of reprogramming rely on destructive methods, which are costly and time consuming.

Now, a team led by Tomonobu Watanabe of the RIKEN Center for Biosystems Dynamics Research (BDR) has used an analytic technique known as Raman spectroscopy to monitor chemical changes in cells. Since it uses a laser beam and doesn’t require labeling samples, Raman spectroscopy offers a less invasive, faster and lower cost alternative to existing methods.

Raman spectroscopy measures the vibrations of molecules by monitoring their interaction with laser light. Different chemical groups vibrate at different frequencies, allowing scientists to detect what compounds are present. “Raman spectroscopy detects molecular fingerprints of cells,” says Arno Germond, also of BDR. “This allows us to identify and characterize the progressive changes in cell metabolism during the reprogramming of stem cells from mice and humans.”

The team explored the possibilities of Raman spectroscopy by using it to look at mouse embryonic stem cells, the neuronal cells they differentiated into, and the iPSCs that the neuronal cells were reprogrammed to form. “We found that reprogramming produces a much bigger difference in the Raman signals than we had expected,” says Watanabe. Germond and his colleagues uncovered evidence that Raman spectroscopy provides spectral biomarkers that indicate the progression of reprogramming. The team also found strong differences between the lipid signatures of embryonic stem cells and reprogrammed cells.

“In addition to the above findings, we used intelligent neural-network algorithms adapted to read the Raman spectroscopy data, which is quite an innovation in the field,” adds Germond.

The team now hopes to demonstrate that the technique can be applied to a wide range of cells from different species. They also intend to investigate the biological basis for the different Raman signals.