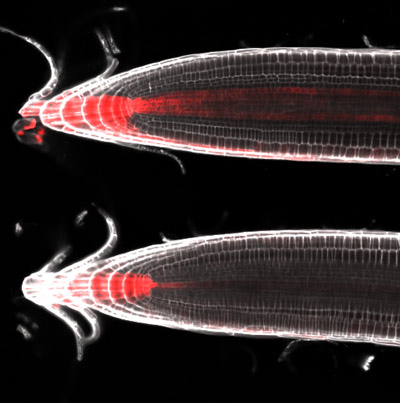 Figure 1: Asymmetric distribution of auxin activities (shown in red), which is required for proper gravitropic responses, is observed in wild type (top), but not in roots in which the gene encoding NPF7.3 is mutated (bottom). © 2021 RIKEN Center for Sustainable Resource Science

In a finding that could be used to improve the nutrient uptake of crops, a RIKEN-led team has identified a transporter protein that is involved in the tendency of plant roots to grow downwards in response to gravity, a phenomenon known as root gravitropism1.

Charles Darwin was among the first scientists to investigate root gravitropism in plants. Through simple but elegant experiments, Darwin showed that plant root tips sense gravity and that they transmit the signal to neighboring tissues so that roots bend toward gravity. We now know that the plant hormone auxin plays a key role in this gravitropic response.

Plant hormones serve many physiological functions and help plants withstand fluctuations in their environment. To function properly, their distribution and activity in cells and tissues must be precisely choreographed. This often involves transporter proteins that mediate the uptake or export of hormones or their precursors by cells.

“We noticed that seedlings in which the gene encoding NPF7.3 was mutated displayed abnormal root growth,” says Mitsunori Seo of the RIKEN Center for Sustainable Resource Science. “Closer inspection revealed specific defects in gravitropic responses, which were not explained by previously reported functions of NPF7.3 as a nitrate and potassium transporter. This made us suspect that this protein might have additional, previously uncharacterized functions.”

Subsequent experiments demonstrated that NPF7.3 functions as a transporter of indole-3-butyric acid (IBA), and that IBA taken up by specific root cells via NPF7.3 is converted into indole-3-acetic acid (IAA), which is the major endogenous plant auxin. This helps establish auxin gradients in root tissues, which in turn direct the gravitropic response.

IBA is a minor precursor of IAA, and the involvement of IBA-derived IAA in gravitropism was previously unknown. However, it seems likely that other plants, including crop species, share similar regulatory mechanisms, which could lead to agricultural and horticultural applications.

“We will be able to modify root architecture by regulating IBA transport,” says Seo. “This should improve the uptake of water and nutrients by roots, and hence promote crop production.”

NPF proteins were originally identified as nitrate or peptide transporters, but it is becoming clear that they are more adaptable than previously thought. “Recent studies, including this one, indicate that this transporter family conveys various compounds including plant hormones and secondary metabolites,” explains Seo. “As a next big question, we want to know how NPF proteins recognize such a variety of substrates.”