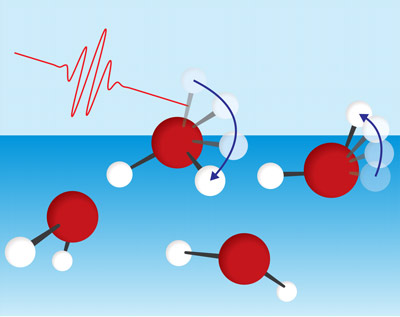 Figure 1: Unlike other water molecules (red spheres: oxygen atoms; white spheres: hydrogen atoms), those at the surface have a free hydroxyl group (OH). Tahei Tahara and his team have used ultrafast spectroscopy (indicated by red photon) to show that the main way these free OH groups lose energy is through rotation (indicated by blue arrows).© 2021 RIKEN Molecular Spectroscopy Laboratory

Chemical reactions and physical processes that involve water surfaces will be easier to model thanks to the discovery by an all-RIKEN team of how the molecules at water surfaces lose energy1.

Water is anomalous in many ways. For example, it has far higher freezing and boiling points than would be expected based on a naive comparison with other hydrides. Most of these anomalous properties stem from the strong electrostatic pull that a hydrogen atom feels for an oxygen atom in a nearby molecule. This attractive force gives rise to hydrogen bonds between neighboring water molecules.

Now, Tahei Tahara of the RIKEN Molecular Spectroscopy Laboratory and his co-workers have discovered how these surface molecules lose energy.

“Water interfaces play key roles in many fundamental chemical and physical processes,” says Tahara. “So understanding how interfacial water dissipates energy is crucial for understanding and controlling interfacial phenomena at the molecular level.”

Surface water molecules have one hydroxyl group (OH) sticking out into the air, which is free from the hydrogen-bond network. The team discovered that surface water molecules mainly dissipate energy by rotating this protruding OH bond (Fig. 1). This goes against conventional wisdom, namely that the surface molecules lose energy only through interacting with neighboring molecules.

“This finding completely goes against the existing belief that energy dissipation of the free OH proceeds with energy transfer,” notes Tahara.

This discovery will shed light on the dynamics of more than just water surfaces. “We believe that our finding provides a basis for fully elucidating dynamical processes including chemical reactions that proceed at the water interface,” says Tahara.

To make their discovery, the team used a spectroscopic technique that singles out the surface molecules and probes how they change with time. It was a challenging measurement to make. “This was a difficult and delicate experiment to perform,” says Tahara. “We had to detect femtosecond changes in the faint signal generated from just a single water layer at the air–water interface while controlling the phase of the femtosecond laser pulses.”

The team next intends to investigate how the hydrogen-bonded OH groups of interfacial water transfer energy. “This will give us a coherent and consistent view of energy-transfer processes at water interfaces,” says Tahara.