Microbes are perhaps more manageable than we thought

The likely adaptive trajectories for viruses and bacteria might be fewer than previously thought, and there may be implications for the superbugs crisis. 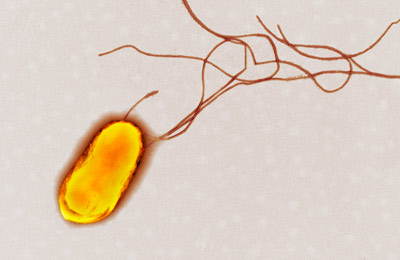 Escherichia coli (E. coli) has a genome with roughly 4,500 genes. The number of mutations possible defies most researchers' analysis resources, unless, as Chikara Furusawa and his team have done, fewer likely evolutionary directions can be identified. © NATIONAL INFECTION SERVICE / SCIENCE PHOTO LIBRARY

Scientists at RIKEN have shown that correlated dynamics mean that the evolutionary pathways taken by microbes are fewer than previously thought—a finding that could significantly improve the predictions of how infectious bacteria will develop antibiotic resistance, and perhaps even help science to steer the course of microbial evolution.

Chikara Furusawa and his team at the RIKEN Center for Biosystems Dynamics Research have a long-standing interest in uncovering the dynamics that drive the evolution of bacteria. It isn’t a research project for the faint hearted. Take the humble gut bacterium Escherichia coli (E. coli) for example. Its genome only contains around 4,500 genes—much fewer than the approximately 30,000 protein-encoding genes of a mouse. But that still creates an astronomical number of possible mutant bacteria, far exceeding present analysis capabilities.

“Biological systems are highly complex, consisting of a huge number of components,” says Furusawa. “If we assume that the state of an E. coli cell can be described by the expression levels of its genes, the state of one cell can be represented by a point in a graph that has 4,500 axes—a very high dimensional state.”

The ability of microbes to rapidly mutate and change has been making headlines with the emergence of a new highly virulent strain of the virus that causes COVID-19. The rise of strains of bacteria that are resistant to multiple antibiotics, which make readily treatable infections potentially life endangering, is also an acute concern globally. Both examples are reminders that microbes are constantly evolving under our noses (or in them!).

Furusawa brings a unique perspective. He’s not a microbiologist or evolutionary biologist by training. Rather, he’s a physicist who has studied the physics of complex interacting systems. The genius of physics is that it simplifies highly complex systems, stripping them down to their essential components. That is what Furusawa and his team are striving to do for the evolutionary dynamics of microbes.

“My question is whether such a high-dimensional state is really necessary to describe the phenotypes of evolutionary dynamics,” says Furusawa. “The expression levels of many genes may change in a very coordinated manner. Such correlated dynamics could greatly cut the number of variables needed to describe an E. coli cell.”

Put simply, the expression levels of two genes may not be independent of each other: if the expression level of one gene changes, then that of the other gene may also change. Thus, the seemingly infinite number of possible paths that evolution offers may all converge into a few broad tracks. This concept has the potential to greatly simplify the problem of characterizing the evolutionary dynamics of microbes. 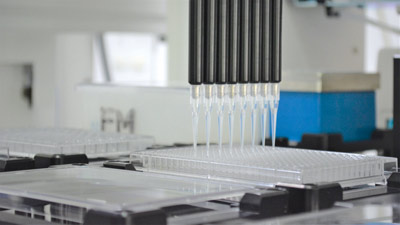 Ninety-five bacteria stressors were used to induce mutations in E. coli. Each was replicated six times, including a control. Ultimately there were 576 culture series that went through 27 daily passages corresponding to ~250–280 generations. This was made possible using a robotic culture system at RIKEN. © 2021 RIKEN

To test this, Furusawa’s team effectively fast-tracked evolution in their laboratory. They exposed samples of a strain of E. coli to one of 95 antibiotics or other stressors. In the first round, the researchers divided each of the initial 95 samples into several vials, and exposed those vials to varying concentrations of the antibiotic, from low to high. The vial containing the highest antibiotic concentration whose E. coli survived was used in the next round of tests. Using this procedure, the team raised roughly 250 generations of each sample. For each of the evolved strains, they analyzed its genetic makeup, its gene expression and its resistance to other antibiotics.

Furusawa and his team found that 89 of the 95 samples of E. coli had developed resistance to the drug it had been exposed to. But more importantly, they discovered that the 95 strains could be clumped together into 11 broad groups. This provided strong evidence that their hypothesis was correct—that evolutionary pathways initiated by different stressors tend to converge to a few broad clumps. This finding implies that evolutionary trajectories are much less complex than they first appear.

The result didn’t come as a surprise to Furusawa, as his team had previously run theoretical simulations that predicted that they would converge. “This is what we’d expected since computer simulations suggested that the number of possible phenotypic changes will be constrained to a low number,” he says.

This demonstration has important implications for combating drug resistance in pathogens as it will allow researchers to predict in advance how drug resistance will develop, which could be vital
in developing countermeasures. But beyond that, it may also allow scientists to steer the course of evolution. “We are now actually trying to control the evolutionary dynamics by dynamically changing the selection pressure,” says Furusawa. This ability to funnel evolution pathways in certain directions could find application in the bioengineering industry, which uses microbes to produce a wide range of useful products. 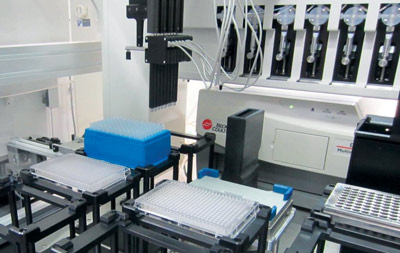 What set the team’s experiment apart was its sheer scope and scale. “Many studies on experimental evolution have been done using only a few antibiotics, but we have greatly expanded the number of stressors,” says Furusawa. “We tried to comprehensively understand the evolutionary dynamics of the E. coli response to stress.”

This was only possible due to a fully automated experimental system that uses robotics to handle the samples. It permits laboratory evolution to be simultaneously conducted on up to 700 strains. The system took Furusawa’s team about a decade to develop and they had many initial teething problems. But this study has demonstrated its power to stimulate evolution in the lab on a scale never achieved before. “As far as we know, it has the highest throughput of any lab evolution system in the world,” Furusawa says. The team is now planning to explore systems made up of multiple species of bacteria, which seeks to mirror what happens in our guts and other sites of bacterial interaction. 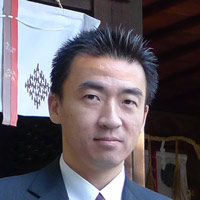 Chikara Furusawa received his Ph.D. from the University of Tokyo in 2000. His thesis focused on computational modeling of multicellular development. He launched his own lab at the RIKEN in 2011. The Laboratory for Multiscale Biosystem Dynamics at the RIKEN Center for Biosystems Dynamics Research now focuses on revealing evolutionary dynamics by integrating highthroughput experiments, data science and theoretical analysis. In 2011, he received the Nishinomiya-Yukawa Memorial Prize and The Young Scientists’ Prize from Japan’s MEXT.