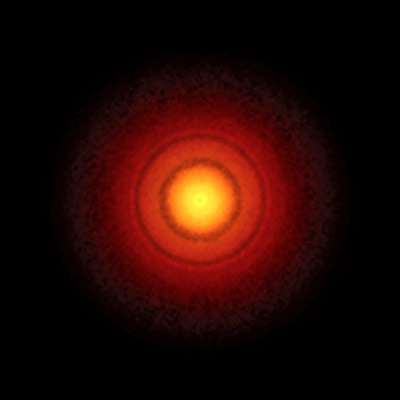 Figure 1: An image taken by the Atacama Large Millimeter/submillimeter Array (ALMA) of the protoplanetary disc around the nearby young star TW Hydrae. This image reveals multiple rings and gaps that indicate the presence of emerging planets as they sweep their orbits clear of dust and gas. Simulations by RIKEN astrophysicists suggest that the rings may form earlier than previously thought. © S. ANDREWS (HARVARD-SMITHSONIAN CFA); B. SAXTON (NRAO/AUI/NSF); ALMA (ESO/NAOJ/NRAO /SCIENCE PHOTO LIBRARYY

On their long journey to form planets, dust grains may coalesce with each other much earlier than previously thought, simulations by RIKEN astrophysicists suggest1. This may mean revisiting conventional theories of planet formation.

Massive planets start off life as specks of dust that are too miniscule to be observed by the human eye. “Planets like the Earth that are thousands of kilometers in diameter evolved from submicron particles of interstellar dust—that’s quite a jump in scale,” notes Satoshi Ohashi of the RIKEN Star and Planet Formation Laboratory. “We’re interested in discovering how dust grains come together to form objects that are thousands of kilometers in size.”

Planets are birthed from protoplanetary disks—swirling disks of gas and dust around new stars. Ring-like structures have been observed in these disks, and the rings are thought to merge into larger and larger structures over time, eventually leading to the formation of planets. But much remains unknown about the process.

Now, Ohashi and his co-workers have studied a possible scenario for the formation of these rings by performing computer simulations. The results they obtained indicate that dust may aggregate into larger particles during the protostellar stage, while the star itself is still forming and much earlier than predicted by current theories of planet formation. “We found that ring structures emerged even in the early stages of disk formation,” says Ohashi. “This suggests that the dust grains may become bigger earlier than we had previously thought.”

This is an unexpected finding because the dust disk is still in a state of considerable flux during the protostellar stage—hardly a promising place for dust to agglomerate. “It’s really surprising because during planet formation the dust grains should stay in the disk, but material is still falling into the central star during the protostellar stage,” says Ohashi. “So we are thinking that planet formation could be a highly dynamic process.”

The team found good agreement between their simulation results and observations of 23 ring structures in disks by the Atacama Large Millimeter/submillimeter Array (ALMA) in Chile and other telescopes. Their results could also explain the recent observation of rings in protostellar disks. “Recent ALMA observations have found at least four ring structures in protostellar disks, which are consistent with our simulations,” notes Ohashi.

In the future, the team hopes to obtain images of ring structures around protoplanetary disks in multiple wavelengths, since that would enable them to better compare their simulation with observations.