Hunting for big game in physics with a small trap

An instrument designed to probe the imbalance between matter and antimatter could make the search for axions much, much more affordable. 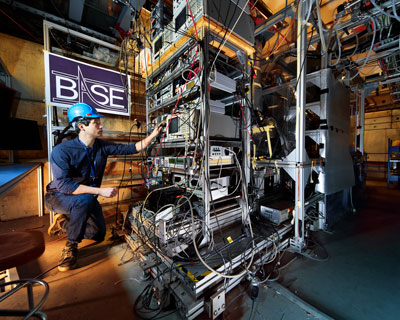 Jack Devlin, a visiting scientist at RIKEN and a member of the BASE team at CERN, looks at readouts from a Penning trap © CERN

The hunt for a hypothetical particle known as an axion, which would resolve some of the biggest problems in modern physics, could be made a lot easier using the single-particle detectors in Penning traps, a team led by Stefan Ulmer of the RIKEN Ulmer Fundamental Symmetries Laboratory has demonstrated1.

First proposed in 1977, the axion was named after a washing powder brand because, if found, it has the potential to ‘clean up’ a vexing quantum mechanical problem. The strong CP problem is an issue with the strong nuclear force, the strongest of four fundamental forces of nature and the one that binds protons and neutrons together in atomic nuclei. However, it doesn't play according to the expected mathematical rules.

“Many physicists are hunting for the axion at the moment,” says Jack Devlin, first author of the study and a member of the Baryon Antibaryon Symmetry Experiment (BASE) team at the European Organization for Nuclear Research (CERN). “If we could convincingly detect axions, it would be huge—the biggest physics you can think of. It would answer some of the most fundamental questions.”

Setting a trap for axions

Ulmer’s real passion lies in investigating another great mystery in modern physics, namely why matter seems to be in much greater supply than antimatter when the present theory predicts they should be present in exactly equal amounts.

All fundamental particles have an antiparticle. For example, the electron’s antiparticle is the positron, but there are far more electrons than positrons around us, and far more matter than antimatter.

According to the most accurate experimental measurements, the binding nuclear force in atomic nuclei remains identical when you swap every particle with its antiparticle and reflect everything in a mirror. But that goes against the theory that gave birth to the standard model of particle physics, which has been such a success in every other test thrown at it.

Ulmer’s team has been using the Penning trap to perform measurements on protons and antiprotons to see if they can find any subtle differences between them that might hint at the reason for the imbalance.

But it struck them that they could use the same equipment to search for the axion. While, in theory, axions are dark and don’t interact with normal particles except via gravity (the weakest of the four fundamental forces), theory predicts that when placed in a strong magnetic field, an axion will decay into a photon of light once in a blue moon. This gives experimentalists an opportunity to spot telltale signs of axions in the lab.

That’s where Ulmer’s Penning traps, based at CERN in Switzerland, can help. Penning traps are operated in the highly uniform magnetic fields provided by superconducting coils. Using a roughly two-meter-long instrument, Ulmer’s team was able to determine constraints on the rate at which axions turn into photons for a narrow range of axion masses, effectively narrowing the search.

The beauty of this demonstration is that it was at a fraction of the cost of equivalent observations by satellites or by the International Axion Observatory (IAXO), built from an almost 10-meter-long decommissioned superconducting test magnet for the Large Hadron Collider, also based at CERN.

"And if our resonant single-particle detectors were purpose-built to search for axions, it could search a much greater area with higher sensitivity,” says Ulmer.

Cleaning up two problems with one particle 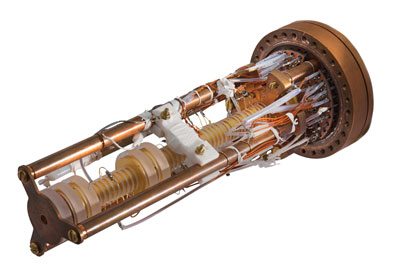 Penning trap precision: A photograph of the Penning trap used as part of the search for axions. Voltages are applied to the gold-coated, ring-shaped electrodes, trapping antiprotons. The antiprotons are used to characterize the superconducting detection circuit. © 2021 CERN

The presence of the hypothetical axion, which should be at least 50,000 times lighter than the electron, would solve the strong CP problem. Some think it could also actually be the hypothetical substance known as dark matter.

The axion is also a highly attractive candidate for the enigmatic dark matter that is believed to make up 85% of the Universe’s mass. Astrophysicists know that dark matter is out there because the outer regions of galaxies are spinning faster than if galaxies were just composed of normal matter. But since none of the elementary particles in the standard model of particle physics fits the properties of dark matter, physicists are searching for exotic particles such as the axion.

Compared to the highly demanding single-particle experiments that Ulmer’s team normally does, the axion measurement was a doddle. “The data taking was simple—I mean, really straightforward,” Ulmer says. Despite the simplicity of the measurement, the demonstration attracted a lot of interest. “I’m really surprised at the discussion this study has generated,” Ulmer says. “The axion physics community is extremely interested in this project.”

When asked how he would celebrate if his team found the axion, Ulmer says that at the very least he would break open a bottle of champagne. He also notes the internal conflict when performing such measurements, “On the one hand, you measure basically expecting to find nothing because you want to avoid bias. But on the other hand, you really hope that you will find something that will revolutionize physics.” 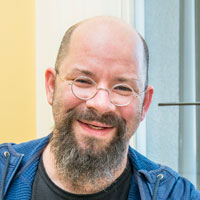 Chief Scientist Stefan Ulmer leads the Ulmer Fundamental Symmetries Laboratory at RIKEN. He is also the founder of the BASE collaboration at the European particle-physics laboratory CERN in Switzerland. BASE performs high-precision measurements of protons and antiprotons to better understand matter and antimatter symmetry. Some of their experiments have had unprecedented sensitivity, including for magnetic moments, which allowed the first ever observation of proton and antiproton spin quantum transitions. Using their Penning traps, his group has performed several world-record measurements, including one for precision in charge–parity–time invariance in the baryon sector by comparing proton/antiproton charge-to-mass ratios. Recently, the lab has started using antiproton spins as dark-matter antennas and single-particle Penning trap detectors as antennas for axion-to-photon conversion.