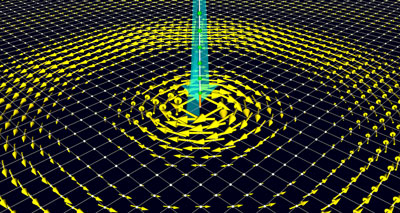 Energy-efficient spintronic devices are closer to being realized thanks to a new mechanism predicted by RIKEN physicists for converting between electrical current vortices and a spin current1.

In addition to its negative electrical charge, an electron has a property known as spin, which can take one of two values: up or down. Just as an electron’s charge is harnessed for information processing in electronics, so the flow of spin could be used in the emerging field of spintronics. Spintronics has the advantage of being more energy efficient than conventional electronics since, unlike an electrical current, a spin current does not generate Joule heat.

An efficient mechanism for converting an electronic current into a spin current and vice versa is crucial for developing spintronic devices.

Now, by using numerical simulations, Sadamichi Maekawa and Seiji Yunoki, both from the RIKEN Center for Emergent Matter Science, together with their co-workers have demonstrated the conversion of a spin current into a rotating vortex of charge current (Fig. 1).

The team hit on the idea of exploiting the Rashba effect—an unusual phenomenon discovered in 1959. It occurs at some surfaces or the interfaces between two materials, where the atomic structure is no longer symmetrical. The Rashba effect causes an electron’s spin and orbital motion to interact. 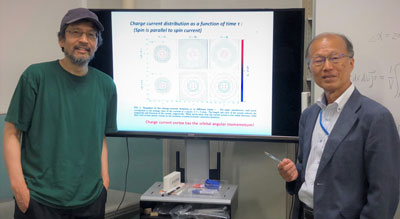 Seiji Yunoki (left) and Sadamichi Maekawa (right) have predicted a mechanism for converting a spin current into a charge current vortex. © 2021 RIKEN

“Spin–orbit coupling is a relativistic effect that mixes the spin and orbital motion of electrons,” explains Maekawa. “Rashba coupling is important in oxide interface structures and in some two-dimensional materials, where it produces various novel topological phenomena that are useful for spintronics.”

Maekawa and his co-workers used large-scale computer simulations to model what would happen when a spin current is injected into a Rashba material via a point-sized electrical contact. The team considered an arrangement in which the direction of the spins is perpendicular to the Rashba material, and their simulations indicated that this created a rotating flow of charge current. This is a result of a fundamental law that angular momentum must always be conserved, and thus the junction converts the injected spin angular momentum mostly into the orbital angular momentum of the current vortex.