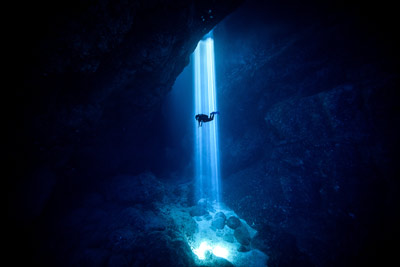 Figure 1: Underwater photographs appear blue because orange/red light is preferentially absorbed over blue light. One consequence of this is that algae have more blue-light-detecting photoreceptors than orange/red-detecting ones. RIKEN researchers have found a single photoreceptor in a green picoplankton that detects light in both ranges. © Hoiseung Jung/EyeEm/Getty Images

The discovery by a RIKEN-led team of a single photoreceptor that can detect orange, far-red, and blue light will provide new insights into the evolutionary history of plant photoreceptors1.

Photoreceptors play important roles in many aspects of plant biology, from photosynthesis to the timing of developmental stages. In the oceans, since blue light penetrates deeper than red light, most marine algae and chlorophytes have a preponderance of blue-light-detecting photoreceptors called cryptochromes rather than phytochromes, which respond to mainly red and far-red light.

Now, a team led by Minami Matsui of the RIKEN Center for Sustainable Resource Science (CSRS) has discovered a single photoreceptor in a green picoplankton that responds to light in both ranges.

The team stumbled upon a chimeric gene—a gene that forms through the merger of two protein-encoding genes—that encodes a two-domain fusion of cryptochrome and phytochrome while investigating the effect of the Great East Japan Earthquake in 2011 on ocean life along the eastern coast of Japan. They were so surprised that they thought it was an error in the data. “We initially thought this fusion gene was an artefact, but it turned out to be real,” explains Matsui.

The researchers dubbed the photoreceptor dualchrome1 due to its ability to detect both orange/far-red and blue light. They found that Pycnococcus, a widely distributed green picoplankton, and its relatives possess dualchrome1. Pycnococcus belongs to a large group of mainly marine green algae that are thought to represent the last common ancestor of all green plants.

In the model land plant Arabidopsis, phytochromes and cryptochromes are encoded by different genes, but interact under certain conditions. For reasons as yet unclear, instead of having two separate photoreceptors, Pycnococcus retains dualchrome1 as a chimeric protein.

It is unclear how dualchrome1 benefits Pycnococcus, but Matsui suggests a couple of possibilities: “In the ocean, light conditions change with depth, diurnally and seasonally; accordingly, dualchrome1 might sense ocean depth, or time and/or season.” The team intends to make knock-out strains so that they can better understand the function of dualchromes and how they contribute to the ecological success of these tiny oceanic organisms. “This is important because green picoplankton sequester atmospheric carbon dioxide, thereby helping mitigate global warming,” Matsui adds.

“The ability of DUC1 to sense orange, far-red and blue light could help us understand how three wavelengths of light are transduced in this microalga to respond to environmental changes,” says Yuko Makita, also of CSRS and the first author of the study.