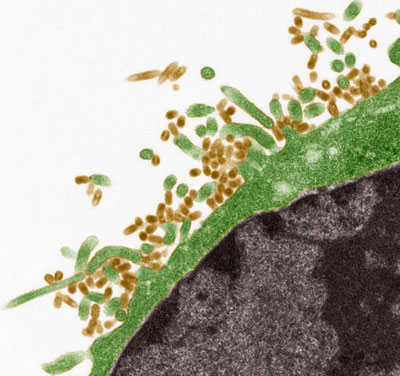 In a finding that should help researchers develop vaccines that offer broad protection against viruses, a mouse study by RIKEN immunologists has shed light on why people vaccinated with an inactivated form of the influenza virus still sometimes contract the disease1.

Influenza is a major global health burden, with the World Health Organization estimating that it causes one billion cases annually. Each year, vaccines are developed that offer some protection against infection. But the influenza virus is a moving target that is constantly mutating, and so vaccines can lose their effectiveness as a season progresses.

There are two common kinds of influenza vaccines: inactivated vaccines (including component vaccines) and live attenuated vaccines. Live vaccines offer broader protection against variants than inactivated vaccines, but they are also more likely to give rise to side effects such as fevers and headaches and as a result they have yet to be approved in some countries such as Japan2. Live vaccines induce the production of broadly reactive antibodies, but until now, scientists didn’t know why.

Now, in a study on mice, Masato Kubo of the RIKEN Center for Integrative Medical Sciences and his co-workers have discovered two processes that live vaccines induce in mice that together account for their broader protection.

They found that, like the virus itself, the live vaccine virus causes the virus to replicate deep in the lungs, which in turn induces a structural change in the virus hemagglutinin—a mushroom-shaped protein on the surface of the virus that plays a major role in infecting cells. This structural change exposes regions of antigens that are recognizable by the immune system but are usually hidden from it. This is the first process.

The second process is the activation of germinal cells by interleukin 4 (IL-4), a cytokine that plays a major role in regulating antibody production. IL-4 is derived from special T cells known as follicular helper T cells. This activation causes a minor population of B cells to proliferate and it is these B cells that are responsible for generating broadly protective antibodies.

The role of IL-4 in inducing the broad immune response came as a surprise. “Until now there had been no direct evidence to show the importance of IL-4,” says Kubo. “That was one of the surprises of this study for me.”

“We believe both processes are needed for generating broadly active antibodies: viral duplication in the lungs and expansion of the minor population of B cells,” says Kubo. “These two processes mostly likely occur when a person is infected by the influenza virus itself.”

The team now plans to investigate if a similar mechanism operates for other viral infections, including COVID-19.