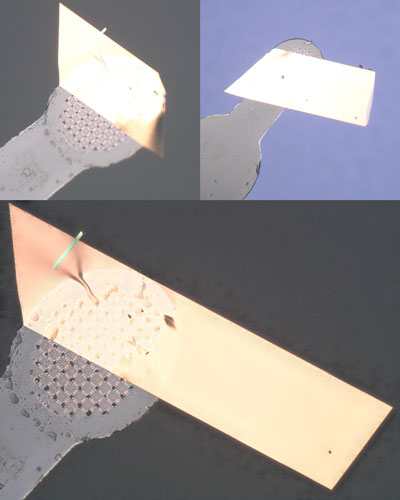 Figure 1: Optical microscopy images of a single crystal of MT-pyrene (gold trapezoid). It boosted the performance of a field-effect transistor. © 2021 RIKEN Center for Emergent Matter Science

Adding a simple, sulfur-containing chemical group to a semiconducting molecule can dramatically boost the molecule’s performance in a transistor, RIKEN chemists have found1. This suggests that the properties of carbon-based semiconductors could be tuned by incorporating these groups.

Most electronic devices are currently based on silicon. However, organic semiconductor molecules offer a way to make cheaper, flexible devices such as display screens, wearable sensors and disposable radio-frequency identification tags. But most organic semiconductors cannot yet match the performance of their silicon rivals.

Two benchmark organic semiconductors are pentacene and its derivative TIPS-pentacene. They contain electrons that smear out across the molecules, forming the so-called p-conjugated system, which aids the transport of electrical charge.

In pentacene crystals, the molecules are arranged in a herringbone pattern, a common structure for organic semiconductors. When these herringbone patterns form a sandwich-like structure, the charge transport is very poor. In contrast, TIPS-pentacene molecules have a more unusual pattern—stacking like bricks in a wall. This shapes the molecules’ p-conjugation in a way that improves charge transport and reduces the impact of imperfections in the crystal. However, it has been difficult to ensure that new organic semiconductors adopt the brickwork structure.

Now, Kazuo Takimiya of the RIKEN Center for Emergent Matter Science and his colleagues have found that adding methylthio groups (CH3S–) to organic semiconductors can help molecules to form this beneficial pattern.

The team then grew 50–150 nanometer-thick plates of crystalline MT-pyrene and used them to produce 26 field-effect transistors. The devices all performed well, exhibiting one of the highest recorded charge mobilities for any organic semiconductor with the brickwork structure.

The researchers found that when each molecule had four methylthio groups, they disrupted certain interactions between neighboring molecules. This prevented them from forming a sandwich herringbone structure, and ensured that they could only stack face-to-face, like bricks. This optimized the interactions between p-electrons and ultimately enhanced charge transport.

The team is confident that this strategy can be extended to other organic molecules. “We think that methylthiolation is a promising approach that can be applied to many other organic semiconductors,” says Takimiya. The team plans to assess how other simple chemical groups affect the crystal structures of materials. They also hope to develop simpler methods to produce larger amounts of such crystals.