Mapping the structural features that regulate a signaling protein’s specificity 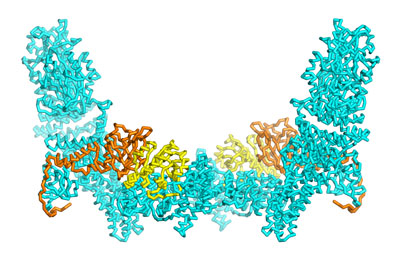 A structural analysis by an all-RIKEN team offers detailed insights into how the function of dedicator of cytokinesis (DOCK) proteins is modulated, and how known disease-related mutations derail that activity1.

The various DOCK proteins play a critical role in regulating cell movement and maturation, but they have also been tied to tumor metastasis and other disorders. While DOCK function is known to be coordinated in part by various engulfment and cell motility (ELMO) proteins, the precise mechanism of this regulation was poorly understood.

“We felt it was essential to analyze the structure of the entire ELMO–DOCK protein complex,” says Mutsuko Kukimoto-Niino of the RIKEN Center for Biosystems Dynamics Research.

To achieve this, she and her co-workers used a technology called cryo-electron microscopy, which can generate three-dimensional structural maps of proteins with atomic-scale resolution (Fig. 1).

As a model, they analyzed structures in which ELMO1 and DOCK5 were assembled into complexes with Rac1, a signaling protein that initiates the biological processes controlled by DOCK5. These experiments allowed them to zero in on a particular domain of ELMO1 that mediates interaction with DOCK5 but that also ensures incorporation of Rac1 into the complex.

Rac1 is just one of several signaling molecules with which the various DOCK proteins can interact, and the specificity of this partnering is a critical determinant of the cellular response triggered by DOCK activity. A series of mutagenesis experiments showed that ELMO1’s interactions with Rac1 are essential for establishing this specificity. In other words, DOCK5–Rac1 binding was weakened by sequence changes that perturbed this region of ELMO1.

Computer modeling confirmed that a DOCK5–ELMO1 complex was physically incapable of binding to Cdc42, a signaling protein that is known to associate with other members of the DOCK protein family.

“The most interesting finding of this study is that ELMO not only assists in the activation of signaling proteins by DOCK, but it is also involved in their specific recognition,” says Kukimoto-Niino.

The researchers were also able to map disease-associated mutations to specific functional elements within the complex. For example, they traced a mutation that predisposes mice to a severe form of cataract to a domain on DOCK5 that normally anchors this protein to the cell membrane.

Going forward, the team aims to generate additional high-resolution structural snapshots of the DOCK proteins at different stages in the signaling process in order to get a better handle on how their activity is regulated.