An electrocatalyst that has a long shelf life is a major step towards realizing terawatts from green hydrogen.

A team of chemists at RIKEN has created a manganese and cobalt oxide electrocatalyst that represents an important step forward in the affordable production of cleaner hydrogen fuels.

Hydrogen can be made using electricity that induces a chemical reaction to split water into its constituent elements: oxygen and hydrogen. “One of the biggest hurdles in generating industrial-scale hydrogen has been finding a suitable catalyst for the oxygen evolution reaction at one of the electrodes of this production system,” explains Ailong Li, who co-led the study at the RIKEN Center for Sustainable Resource Science.

The difficultly, he explains, has been finding an electrocatalyst that has high activity, but can also withstand the acidic conditions under which the reaction occurs. This newest catalyst is made from affordable materials, and is stable in acid for months while remaining highly active1, says Li.

‘Green hydrogen’ is made using renewable sunlight or wind energy to generate the electricity that splits water. It could hugely reduce global carbon dioxide emissions if it replaced fossil fuels at industrial scales, says Shuang Kong, who co-led the study. And when hydrogen is then combusted to produce energy, it reverts to water again, making it a truly pollution-free fuel.

The International Renewable Energy Agency, an intergovernmental organization supporting countries in their transition to a sustainable energy, predicts that generating green hydrogen on a large scale could become a cost-competitive option within the next decade. They’ve called it “a game-changer on the path to carbon neutrality”. 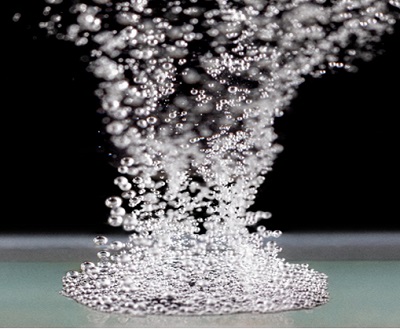 Figure 1: A stream of bubbles produced using a new electrocatalyst that is both stable and has a high activity. © Matoko Oikawa

While some electrocatalysts already exist that meet both conditions of stability and activity, they all suffer from one drawback—they contain one of the scarcest elements on Earth: iridium.

Since the global production of iridium is a mere seven tons per year (to put that into perspective, 170 tons of platinum, which is considered a rare metal, were mined in 2020), generating the terawatt levels of green hydrogen needed for industrial use would require four decades’ worth of the world’s iridium.

Then in a 2019 study, Li and his co-workers discovered that manganese oxide showed excellent stability in acid for catalyzing the oxygen evolution reaction2. Now, they have shown that, by incorporating manganese into cobalt oxide—another electrocatalyst—to produce a mixed oxide, it is possible to increase the lifespan of the electrocatalyst in strong acid by a factor of about 100 without sacrificing activity. This takes the lifetimes of iridium-free electrocatalysts from just days or weeks to longer than two months.

Li was thrilled when he first saw the electrocatalyst in action. “Our electrocatalyst was very active,” says Li. “Even before we made the measurements, it was a beautiful sight to see it generate a cascade of bubbles.”

The manganese imparts stability to the electrocatalyst, while the cobalt gives the oxide its high activity. Kong describes manganese as “nature’s catalyst for water oxidation.” The team found that the optimal mixture was two atoms of cobalt to every one of manganese.

<>Importantly, both manganese and cobalt are vastly more abundant than iridium: the global annual production of manganese is more than 60,000 times greater than that of iridium and it is the fifth most common metal in the Earth’s crust.

There is still room for improvement in the catalyst’s lifespan. While the activation barrier of the mixed oxide rivals that of iridium oxides, iridium catalysts can last for decades before needing to be replaced. But Li is encouraged by the advance. “In the long run, we believe that this is a huge step toward creating a sustainable hydrogen economy,” he says.

Hydrogen, he adds, is also an important industrial chemical that is used to produce ammonia, a key component of fertilizers. The current industrial process for manufacturing ammonia is highly energy intensive and uses fossil fuels: it accounts for nearly 2% of the global emissions of carbon dioxide. Green ammonia produced from green hydrogen could help to slash these emissions.

An early inspiration, says Kong, was a 2004 speech by Nobel laureate Richard Smalley, in which Smalley describes a future in which trillions of watts (terawatts) of renewable energy is generated to drive industry instead of burning fossil fuels.

Looking forward, Li sees lots of ways to enhance their electrocatalyst and produce green hydrogen more efficiently. “There are so many avenues we can pursue to advance this technique,” he says. “In addition to improving the electrocatalyst, we can also enhance the water-splitting membrane that is sometimes used.”

Li points out that when you’re dealing that terawatt-scale hydrogen production, even a small rise in efficiency can yield great gains. “Just a 1% increase in efficiency across today’s large scale-industry could save 88 billion kilowatt hours per year and reduce carbon dioxide emissions by 34 million tons.” 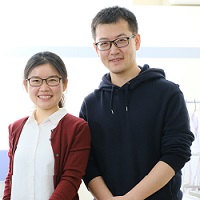 Ailong Li and Shuang Kong are postdoctoral researchers in the Biofunctional Catalyst Research Team at the RIKEN Center for Sustainable Resource Science (CSRS). They both moved to Japan in 2017. Li first worked as an International Program Assistant (IPA) between 2017 and 2019, while Shuang Kong worked on RIKEN’s technical staff between 2018 and 2019. They are now working on finding alternative catalysts for iridium used in polymer electrolyte membrane (PEM) water electrolysis, funded by the New Energy and Industrial Technology Development Organization (NEDO).