A new and unexpected cell death mechanism found in fly guts opens up big questions about how the digestive system really maintains its balance. 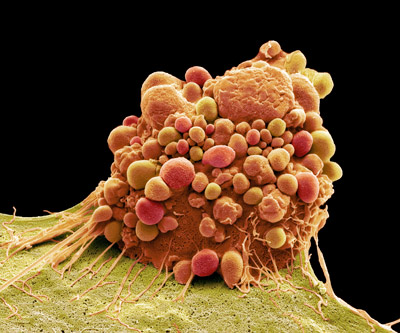 The new type of cell death found in the gut appears to be gradual, perhaps so the cells (pictured) can act as a protective barrier even as they break down. © STEVE GSCHMEISSNER / SCIENCE PHOTO LIBRARY

The discovery of a new form of cell death by RIKEN researchers challenges long-held beliefs about how old or damaged cells in the intestine of the fruit fly, Drosophila, are replaced1. If also found in mammals, the finding could have wide-ranging implications for the way we understand the gut and fight cancer.

In multicellular organisms, cell death is vital to maintaining tissue balance—homeostasis—by removing old, damaged and potentially harmful cells and replacing them with new ones. It has long been thought that gut cells die via a well-known type of cell death called apoptosis.

“Apoptosis is like cell suicide. It’s very important during tissue development and also for preventing cancer,” explains Sa Kan Yoo of the RIKEN Center for Biosystems Dynamics Research (BDR), who led the study.

The discovery of the new cell death mechanism—coined ‘erebosis’—was made by chance. Researchers noticed that cells containing the angiotensin-converting enzyme (Ance), were missing many essential components (including the cell skeleton, DNA and other indispensable items). Conventional wisdom suggested it was impossible that the cells could still be alive.

A series of follow-up investigations revealed a number of surprising findings. “No matter how hard we tried, we couldn’t find any role for apoptosis in normal fly gut physiology,” says Yoo. “Even if we inhibit apoptosis, it doesn’t prevent cell turnover or tissue homeostasis in fly guts.”

The researchers also found that the erebotic cells were located near clusters of gut stem cells which produce new cells, indicating that the erebotic cells might be being replaced with new gut cells. This suggests that erebosis may not be an accidental form of cell death triggered by a trauma, but a normal part of gut function.

After decades of research, the major cell death mechanisms were thought to be understood in detail.

For instance, cells undergoing apoptosis undergo a series of well-defined molecular and morphological changes: they become rounder and smaller and activate an enzyme called caspase. This ‘programmed cell death’ plays an important role both during development and normal cell turnover.

Another type, called autophagic cell death, generally occurs during starvation. Autophagic cell death is characterized by the formation of large bubbles (or vacuoles) that destroy the contents of the cell. “Autophagy is a mechanism that can help cells to survive, but if it proceeds too much then it can lead to their death,” explains Yoo.

Necrosis is more of an accidental process triggered by infection or injury. During necrosis, a cell will undergo swelling and then burst to release its contents.

While the exact mechanisms of erebosis are yet to be explored, the group noted via fluorescence studies that the new type of cell death appeared to be a gradual process. Because of this, they hypothesize that erebotic cells may be similar to skin cells, which act as a protective barrier even as they break down. This enables a continuous flux of gut tissue repair without allowing tissue integrity to be breached or arousing immune responses. 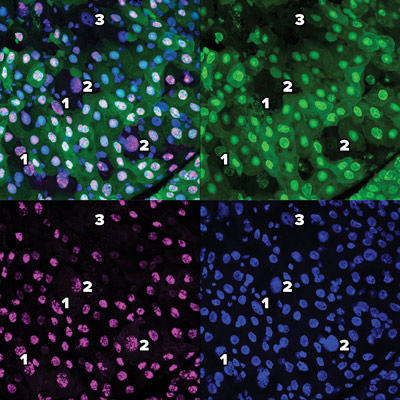 Although most scientific breakthroughs take years of painstaking research, often serendipity provides a final push. Here, the researchers were actually studying Ance—the Drosophila equivalent of an enzyme in humans involved in controlling blood pressure—when they made their unexpected discovery.

“We found that Ance had a very interesting expression pattern in the fly gut,” explains Yoo. “The cells that contained this enzyme were very unusual: they looked dark under the microscope.”

After noticing that these dark cells were denuded, and making their hypothesis about seeing a new type of cell death, they named the phenomenon ‘erebosis’, based on the ancient Greek word ‘erebos’ meaning darkness or shadow.

The researchers also ruled out the possibility that they were dying through apoptosis, autophagic cell death or necrosis through a series of experiments. “The gut cells we found didn’t have any of the striking features or characteristics of apoptosis, necrosis or autophagy,” explains Yoo. “While there is no way to stop necrosis, there are many ways to experimentally stop apoptosis or autophagy from occurring. When we did this in the fly gut, erebosis still occurred.”

“These results suggest that erebosis might play an important role in maintaining gut tissue homeostasis,” says Yoo. “But we haven’t proved that yet—it’s still speculation.”

The next critical step will be to identify specific molecular markers of erebosis and the genes involved in this process.

“If we can understand what’s going on at the molecular level, we can then carry out experiments to find what happens when we stop this process from occurring in the fly gut,” says Yoo. “That will then allow us to truly understand the function of erebosis.”

Another huge unanswered question is whether erebosis also occurs in mammals, including humans. “In tissues like the skin, gut or blood, cell turnover is a very important process in our daily lives,” Yoo points out. In many tissues, cell death is happening constantly and it is estimated that humans shed 1011 (100,000,000,000) cells from the small intestine every day2.

Cell death is also a key player in tumor growth. During the development of colon cancer for instance, tumor cells are thought to become resistant to apoptosis. Defective apoptosis regulation has been linked to the extended lifespan and growth under stress conditions of cancerous cells, the accumulation of further genetic mutations, the formation of blood vessels in tumors and spread to different parts of the body. Insights into new forms of cell death my change our understanding of this process and lead to new treatments.

“I feel our results have the potential to be a seminal finding,” Yoo says. “Personally, this work is the most ground-breaking I have ever done. We are keenly interested to find out whether erebosis exists in the human gut.” 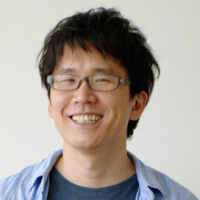 Yoo graduated in medicine from Kobe University. He worked on cell migration mechanisms at Dr Yasuhiro Minami’s lab while he was not working on the wards. He later obtained his PhD on wound responses in zebrafish from Anna Huttenlocher’s lab at the University of Wisconsin-Madison. Yoo then joined Iswar Hariharan’s lab at the University of California, Berkeley as a postdoc and investigated mechanisms of tissue repair and oncogenic stress using Drosophila and zebrafish. At RIKEN, he was appointed an associate chief scientist in 2015, a chief scientist in 2017 and then a team leader in 2018. Yoo’s laboratory focuses on mechanisms of tissue and organismal homeostasis such as cell death, cancer and aging.