RIKEN physicists have fabricated a nanoscale ‘heat engine’ that uses a property of electrons known as spin as the effective working medium1. It is promising for exploring the development of spintronic heat engines capable of harvesting waste heat from devices.

Heat engines convert a heat difference into more useful forms of energy as heat flows from warmer to cooler regions of electronic devices. Reducing them to the nanoscale would enable waste heat generated to be converted back into electrical energy and thus improve efficiency.

One way to create nanoscale heat engines is to use tiny crystals of semiconductors known as quantum dots (Fig. 1). Somewhere in the range of 10 to 100 nanometers in diameter, a quantum dot can trap one or a few electrons. 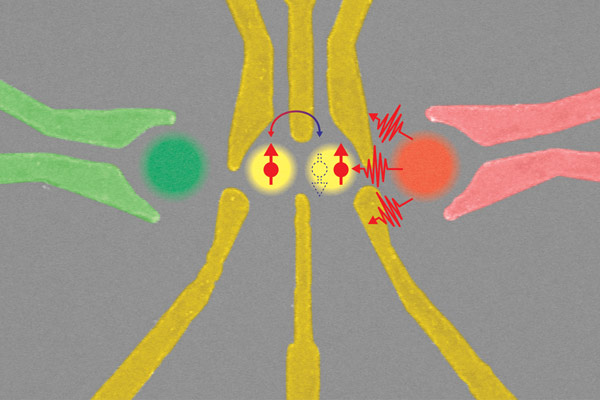 Figure 1: A double quantum dot device enables the study of how the spin and charge of an electron influences thermodynamic action in the presence of a lattice temperature gradient. Lattice vibrations known as phonons (three red squiggles) come from the red quantum dot on the right, which acts as a local heater. They can cause the spin on of the two electrons (yellow dots) to flip, which is detected by the green quantum dot, which acts as a charge sensor.

Reprinted, with permission, from Ref. 1. Copyright 2022 by the American Physical Society.

Previous heat engines based on quantum dots have used reservoirs of electrons at different temperatures. However, to gain a better understanding of the underlying thermodynamics it is desirable to create a heat engine that operates on lattice temperature. But generating a lattice temperature gradient across a few hundred nanometers is technically challenging.

Now, Seigo Tarucha at the RIKEN Center for Emergent Materials Science and his colleagues have succeeded in doing this in their quantum-dot heat engine.

In their device, electrons are confined using electric fields generated at surface metal electrodes on a gallium arsenide surface. The device had two interlinked quantum dots and a built-in charge sensor to passively monitor what was going on within the double quantum dot (Fig. 1). A third quantum dot was used to control the double quantum dot’s thermal environment; effectively, it acted as a local heater.

The researchers anticipate the device will greatly contribute to our understanding of the fundamental physics of thermoelectric devices. “The results give valuable insights into developing spintronic heat engines,” says Tarucha. “In particular, this setup will provide an experimental platform for studying the thermodynamics of cooperative spin–charge systems.”

The next challenge will be to introduce on-demand control of heat flow in the spin–charge cooperative system. “We’re now developing a technique to rapidly switch the heat flow,” explains Tarucha. “This will provide a new platform to study the physics and apply for development of spintronic heat engines.”