A technique that moves troublesome whirlpools of current in superconductors could help to boost the performance of these materials. 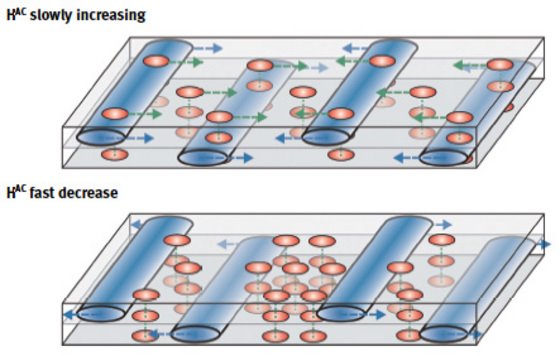 Figure 1: The current focuses the magnetic flux lines (i.e., vortices) on the center of the sample.

Electricity can flow through superconducting materials with no resistance, making them an extremely efficient way to carry electrical currents that can produce large magnetic fields, such as those required for medical imaging. They can also be used in instruments that measure very small magnetic fields, called Superconducting Quantum Interference Devices (SQUIDs).

But superconductors are so sensitive to magnetic fields that even the Earth's own magnetism can induce tiny whirlpools of current in the material. Each of these vortices produces a small magnetic field of their own, and their fluctuating motion introduces random 'noise' into a superconducting device, reducing its sensitivity. The vortices can be pushed around by electrical currents, or trapped by defects, like scratches, in the material.

"So we propose a way to remove these trapped magnetic flux lines that move around and produce noise in the measurements," says Franco Nori, a materials scientist at RIKEN’s Frontier Research System at Wako-shi, Saitama, Japan, and also at the University of Michigan in the USA.

They tested the idea in a layered,crystalline material made from the elements bismuth, strontium, calcium and copper, known as Bi2212, which becomes a superconductor when cooled to about -182°C The team found that the vortices could be transported from the central part of the crystal to the edges in just a few minutes. They have published their results in Nature Materials 1.

Previously, researchers have tried to control these vortex currents by modifying the material itself, an extremely expensive and timeconsuming procedure. The beauty of Nori's approach is that both magnetic field and electrical current can easily be tweaked so that the vortices are moved around with much greater control. The alternating current does not affect the overall operation of the device, Nori adds.

&quotThese advantages, and its simplicity of implementation, should allow the approach to be transferred to different systems," comments Akira Tonomura of the Hitachi Advanced Research Laboratory, Saitama,Japan and RIKEN FRS2.