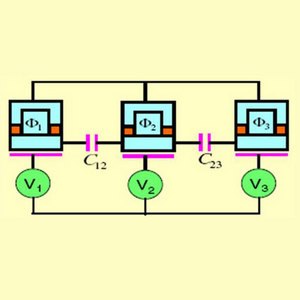 Figure 1: The three superconducting devices linked together in this circuit could form a key element of a future quantum computer.

A simple circuit that tests the boundaries of quantum physics has been devised by RIKEN scientists. The proposed device could also be a key element of a future quantum computer, where information is stored and processed using the quantum properties of sub-atomic particles.

The circuit relies on three tiny superconducting devices that can carry electrical current, in the form of pairs of electrons, with virtually no resistance (Fig. 1). If trapped within the superconductor, zero or one excess electron pair on top of a huge number of pairs can represent the logical states of `zero' and `one' used in conventional computers.

The data can be retrieved by counting the change in the number of electron pairs held in each superconducting ‘box’.

But there’s a catch. Although each box contains billions of electron pairs, making it far from sub-atomic, the behavior of the electrons is governed by the rules of the quantum world. This makes it possible for the overall quantum state of each box to become entangled with its neighbors so that they share the same information, as if they were part of a unified whole. Einstein himself dubbed this strange entanglement as ‘spooky action at a distance’, and it means that changing—or even measuring—the status of one of the superconducting electron-pair boxes can instantaneously affect the other two.

So each box essentially behaves as a unique quantum particle, and linking the three in this way is known as Greenberger-Horne-Zeilinger entanglement, named after the scientists who first described it in 1989.

“We propose that these phenomena can also be observed in the macroscopic world, using circuits, and not only in the microscopic realm,” explains L. F. Wei of RIKEN's Frontier Research System in Wako, who devised the circuit with his colleagues Yu-xi Liu and Franco Nori, who is also at the University of Michigan, USA. Their proposal is published in Physical Review Letters 1.

The three superconducting boxes should be much easier to manipulate into specific quantum states than individual electrons, and controlling these ‘macroscopic’ quantum states provides a way to test some fundamental laws of quantum mechanics, such as entanglement, at the macroscopic level, says Nori. “But it is also a key step to building future quantum computers,” he adds.

Since quantum states can exist in various combinations known as superpositions, there are many more configurations available to the three superconducting boxes than if they were a simple series of classical computer bits, which substantially increases the system’s computing power. “We believe that the proposed system could be experimentally built in the near future,” says Wei.