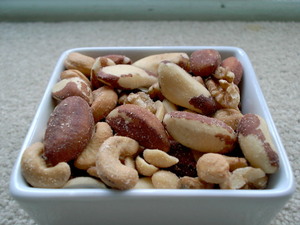 Shake a box of mixed nuts, and the largest will eventually rise to the top. Commonly known as the Brazil nut effect, scientists have now shown that this curious phenomenon may be influenced by a long-range force connecting the biggest nuts, even though they do not touch each other.

The Brazil nut effect appears in a wide variety of granular fluids (mixtures of solid particles that can flow like liquids), and can influence industrial processes such as drug preparation. But predicting the effect has always proved difficult: larger particles can rise or fall depending on the make-up of the mix, and their relative sizes.

Computer simulations by Franco Nori, a physicist from RIKEN's Frontier Research System in Wako and the University of Michigan, USA, and his international team of colleagues, may now provide an answer.

Their simulation imagines a box of small balls that includes two ‘intruders’, each eight times wider than the smaller balls. When the box is shaken, the intruders move away from each other, they report in Physical Review Letters1. Surprisingly, the repulsive force between them seems to behave in a very similar way to an unusual effect in quantum physics known as the Casimir force.

The Dutch theoretical physicist Hendrik Casimir predicted in 1948 that two parallel plates in a vacuum would feel a small force pulling them together. This is because a vacuum is not actually empty: instead, it is a roiling mess of ‘virtual’ particles popping in and out of existence. This produces electromagnetic radiation, such as light waves, which have to squeeze in between the plates. Waves of the wrong length that do not fit neatly tend to be suppressed, and this acts like a tiny reduction in pressure between the plates that makes them move closer to one another.

Nori and colleagues propose that a similar fluctuation-induced force is at work inside their mixture of particles. In a box containing just small particles, waves of movement will ripple through the box. But adding two large intruders limits the size of wave that can exist between them. In this case, the waves that do get between them seem to press the intruders apart. The scientists say that this force could play a critical role in the behaviour of granular fluids—as well as explaining why the nuts always rise to the top of your muesli box.