A helping hand for proline 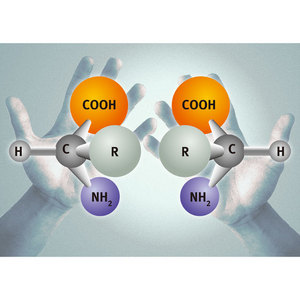 Like most biological molecules, amino acids can take one of two different mirror-image forms. Now scientists think they may have found a clue to solve one of the biggest puzzles in science: why only the ‘left-handed’ form of amino acid is found in living systems.

Amino acids are the building blocks of every protein in our bodies, and just like your hands they are chiral—you cannot superimpose an amino acid on its mirror image (Fig. 1). These left- and right-handed forms are called enantiomers. But scientists are still unsure why left-handed amino acids should be preferred over right-handed, or how this situation first arose on the prebiotic Earth—the so-called ‘origin of homochirality’.

Hiroyuki Koshino at RIKEN’s Discovery Research Institute, Wako, and Yujiro Hayashi at the Tokyo University of Science, have now discovered how a left-handed amino acid might have got its first foothold as the preferred enantiomer. They have found that a mixture of the solid amino acid proline containing only a slight excess of the left-handed enantiomer can generate a solution that contains almost exclusively left-handed proline1.

Creating such a large excess of one enantiomer can often pose a serious challenge for synthetic chemists, but Koshino and Hayashi’s team say that the procedure is so simple that something similar could conceivably have happened by accident on the early Earth.

They found that in crystals of proline that contained an equal mixture of the two enantiomers—called racemic crystals—the molecules can fit together in a way that allows more chemical bonds to form than in crystals containing just one enantiomer (Fig. 2). These bonds are called hydrogen bonds, and rely on the attraction between partially charged positive and negative areas of the proline molecule. Although not as strong as the bonds that normally tie atoms together into molecules, they are tough enough to make the racemic crystals more insoluble in a mixture of chloroform and ethanol and therefore more likely to precipitate from the liquid. 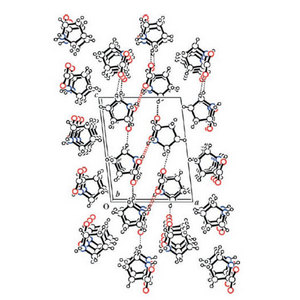 By carefully controlling the proportions of ethanol and chloroform, the team could exploit this to transform a 55:45 mixture of left- and right-handed solid proline into an almost pure solution of the left-handed enantiomer. This is the first time that a single enatiomer has been dramatically enriched by this mechanism, the team says.

The left-handed proline can act as a catalyst in the formation of other biological molecules, and other scientists have suggested that once left-handed amino acids were established on Earth, they could act as a template to determine the handedness of many other biological compounds, such as sugar molecules. To demonstrate the activity of their enantiomerically enriched proline solution, the scientists used it to catalyse a reaction between propanal and nitrosobenzene. These two molecules can stick together in two different ways, and would normally produce a racemic mixture of enantiomers. But with the enriched solution of proline added to the mix, only one enantiomer of the propanal-nitrosobenzene product forms.

The scientists speculate that similar processes could have been at work before life began on Earth. A very slight imbalance in the handedness of amino acids could be amplified into a biological preference for left-handed enantiomers by the same mechanism, they suggest. For example, solid crystals of mixed left-right proline could be filtered out as a liquid dripped through rock strata, leaving an enriched solution of left-handed amino acid behind, primed to influence the subsequent reactions that kick-started life.

However, the solvent system they investigated—ethanol and chloroform—would not have existed on the early Earth. Nevertheless, the team is optimistic that they could find a water-based system able to purify proline in the same way. “I hope that there is some possibility for water under some special condition,” says Koshino.

But even if this method for amplifying the relative amounts of left-handed proline does replicate what happened on Earth before life began, the system still needs a slight imbalance of the two amino acid enantiomers to begin with.

The team points out that one potential source for that initial excess could be meteorites. Some chunks of space rock are loaded with carbon-based organic materials that have been exposed to harsh conditions on their journey through space. Previous experiments on artificial mixtures of such compounds have shown that ultraviolet light can trigger the formation of proline.

Meanwhile, various astronomers have suggested that circularly polarised starlight—light whose electric field twists like a corkscrew as it travels—can preferentially destroy one amino acid enantiomer in preference to its twin. This would mean that when the meteorite arrived on Earth there would be a slight excess of one enantiomer of its proline cargo. In Earth’s case, sheer chance brought us a little extra of a left-handed amino acid that subsequently set a four-billion-year precedent.

This part of the theory is far from being proved. However, key evidence for the meteorite delivery theory could come from the European Space Agency’s Rosetta spacecraft, which is due to land on the comet Churyumov-Gerasimenko in 2014. Once there, it will search for amino acids on the surface, and will also be able to detect their handedness. 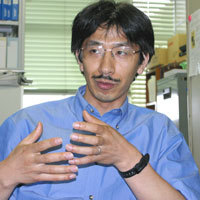 Hiroyuki Koshino was born in Hokkaido in 1963. He graduated from the Faculty of Agriculture, Hokkaido University in 1985 and received his doctorate in agriculture from the same university in 1990. In the same year, he joined RIKEN's Antibiotics Laboratory as a postdoctoral fellow. In 1992, he moved to the Molecular Characterization Division of the RIKEN Discovery Research Institute, and was appointed as the leader of the Molecular Characterization Team in 2003.