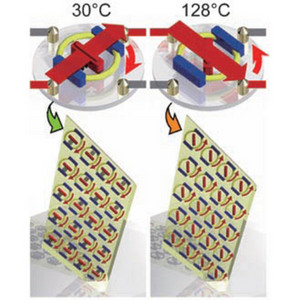 Researchers from the RIKEN Discovery Research Institute, Wako, and the Tokyo Institute of Technology have developed a new molecular switch that works by using the collective motion of molecules within a crystal.

Over recent years, many researchers from different backgrounds have focused their attention on developing molecular machines and devices. Molecular switches will play a crucial role in any such machines allowing the tiny devices to be turned on and off. The challenge is to develop a system that allows a reliable connection to be made between the switch and other devices to produce a system or circuit.

With this point in mind, the research group, led by Tatsuo Wada, decided on a new strategy to develop a switch from a supramolecular crystal. This strategy has been reported in Angewandte Chemie 1. The benefit of using a crystal is that connection to other devices is straightforward. The crystal is made up of supramolecules known as pseudorotaxanes, which consist of two parts: an axle and a wheel, that form a complex in which the axle is threaded through the wheel.

Using x-ray analysis, Wada and his colleagues could see that all the molecules were aligned in the crystal. Both parts of the molecule contained aromatic groups that were also perfectly aligned, face-to-face, throughout. Surprisingly, upon heating from 30 to 128°C, all the aromatic groups on the axle rotated together through 45° changing their configuration. The groups then moved back to their original orientation on cooling. The molecules could be switched a number of times between both orientations (Fig. 1).

This collective motion was also followed visually. Under polarized light the crystal appeared green then changed to orange when heated. The crystal reverted to green upon cooling. For such a clear color change to be seen, the motion of all the axle molecules must be in the same direction. Free movement of the axle is restricted as a consequence of the position of the wheel.

Masaki Horie, a member of the research group, points out that this project, and the results achieved in developing this thermo-optic switch, would not have been possible without the collaboration of experts from several different fields.