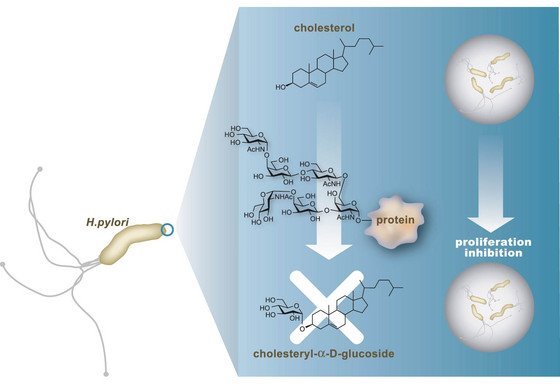 Figure 1: An illustration of how the hexasaccharide antibiotic prevents bacterial growth of Helicobacter pylori.

A team of Japanese scientists led by Shino Manabe from the RIKEN Discovery Research Institute, Wako, has synthesized an oligosaccharide with antibiotic activity.

Helicobacter pylori is a very common bacterium that infects nearly half the human population and can lead to diseases such as gastric ulcers, carcinoma and cancer. The infection takes hold in the lining of the stomach and can be treated using a combination of antibiotics; however resistance can be a problem and many people suffer allergic reactions to them. Therefore, the development of new, more effective antibiotics is crucial.

A few years ago, it was discovered that, although the bacterium prospers on the surface of the stomach lining, deeper down in the membrane its growth is suppressed. It was proposed that a glycoprotein, a protein with saccharide side chains, was responsible by effectively inhibiting the synthesis of a compound needed by the bacterium to form cell membranes (Fig. 1). Upon investigation this glycoprotein was shown to consist of an unusually branched hexasaccharide believed crucial for this behavior.

With existing methods to synthesize this molecule producing only small amounts of material, Manabe realized the importance of being able to make larger quantities to allow for more detailed studies. Therefore, her team set about designing and preparing an efficient strategy to produce the hexasaccharide as presented in a recent paper published in the Journal of Organic Chemistry 1. The structure proved a challenge because a particular part of the saccharide needs to be arranged in an uncommon way where two adjoining groups are on the same side of the molecule instead of on opposite sides, known as a 1,2-cis linkage.

Overall the synthetic route developed by the team gave good yields in an efficient way allowing for greater quantities of material to be obtained. Manabe’s strategy has an additional benefit: the way in which the researchers have synthesized the compound means making derivatives will be straightforward. Following the success of this project, the team is now focusing on using their approach to synthesize various oligosaccharides and investigate their potential biological activity.

This planned study should provide the team with the opportunity to fully investigate and understand the inhibition mechanism and consequently develop suitable drugs. “It might be possible to develop a novel drug candidate that produces minimal side effects and is specific against Helicobacter pylori. The mechanism of growth inhibition is different from the currently used antibiotics,” explains Manabe.