Don’t get too close 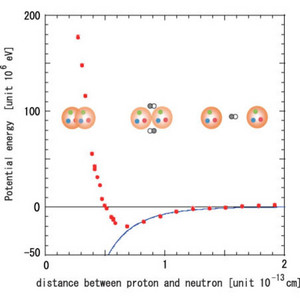 Figure 1: The nuclear potential between a proton and a neutron as a function of separation distance. The blue line represents the predictions of Yukawa’s original one-pion exchange potential, and the red dots are the predictions of the present study that shows strong repulsion at short range. Copyright © Aoki, Hatsuda and Ishii 2007

The force that holds atomic nuclei together is a complicated residual effect of the strong force between quarks and gluons—elementary particles that make up protons and neutrons. RIKEN researchers at the University of Tsukuba are explaining the nuclear force by extending quantum chromodynamics (QCD), the theory of the strong force1.

The nuclear force involves the exchange of particles such as pions, first predicted by Nobel laureate Hideki Yukawa over 70 years ago. The force is thought to consist of three distinct regions (Fig. 1).

At separations greater than two femtometers (quadrillionths of a meter), the nuclear force falls off exponentially with distance and is mainly communicated by one-pion exchange. Closer in is a potential well that traps the nucleons at an average separation of about one femtometer—and where the exchange consists of multipions and heavy mesons. Closer still, the nucleons interact directly and the force is strongly repulsive.

The repulsive core explains scattering experiments, the stability of nuclei, and even supernova explosions. It is probably caused by the structures of quarks and gluons in the overlapping nucleons, but this remains an open question. The RIKEN researchers made use of lattice QCD—a theory restricting quarks and gluons to a discrete space-time lattice—to investigate the repulsive core in numerical simulations.

“Previous studies have tried to extract the nuclear force from the energy of two nucleons whose separation is kept fixed, but this is difficult because they move around,” says team-member Sinya Aoki. “In our study, we calculated the wave-function of two nucleon systems—which is very similar to experimentally measured quantities—and derived the potential from it.”

The potential obtained from the wave-function is plotted in Figure 1 as red dots. This result reproduces the nuclear potential observed in experiments, with repulsion at short distances and attraction at long distances. In particular, data at long distances are consistent with Yukawa's original one-pion exchange potential, represented by the blue line.

“At this moment, we can only say that QCD reproduces the qualitative behavior of the nuclear potential,” says Aoki, “however our study opens the possibility of studying the repulsive core from its first principle—the dynamics of quarks and gluons.”

In future, QCD could be extended to study interactions between hyperons. These three-quark particles (baryons) include the third type of quark, ‘strange quarks’, whereas nucleons only contain up and down quarks. Hyperons play important roles in neutron stars, but their interactions are not fully understood.