Chemical compounds that can be converted between two states with different physical properties are promising building blocks for molecular devices, the most obvious candidates being switches. If this process can be triggered with an external stimulus—such as heat or light—it can be controlled remotely and, therefore, integrated into a functional system.

One method of introducing bistability into a material is to exploit valence tautomerization—the phenomenon in which the bonding electrons in some molecules reorganize while the connectivity of the atoms remains the same. The two different forms—each with a different electronic structure—that result from this process are known as valence isomers, and often exhibit distinct optical and magnetic properties.

Relatively few molecules undergo valence tautomerization, and a team including Mio Kondo and Hiroshi Nishihara from the University of Tokyo and Yoshio Kobayashi from RIKEN’s Nishina Center in Wako suggest that, “the development of a new class of compounds exhibiting this type of behavior is very important for the progress of materials science.”

To this end, Kondo and co-workers have devised a novel chemical reaction to make cyclic structures that can switch between different valence isomers. Whereas the atomic rings in these molecules have previously been made by quite complicated procedures, their method is an efficient acid-promoted one-step process1.

The starting point is a compound comprising an iron-containing group linked to an aromatic ring system through a carbon–carbon triple bond (Fig. 1a). When treated with a strong organic acid, an additional six-membered ring, shown in red in Fig. 1b, is formed by a cyclization reaction. As a result of this process, a larger region of alternating singe and double bonds—a so-called π-conjugated system—is created.

Expansion of the π-conjugation lowers the energy of the molecule and enables the transfer of an electron from the iron atom to the newly formed ring system in what is a valence tautomerization. This reorganization of the electronic structure can be easily detected because the iron is oxidized from Fe(II) to Fe(III) in the process, and these species can be distinguished with spectroscopic methods.

These valence isomers (Figs 1b and 1c) can be reversibly interconverted and the amount of each present in a sample depends on the temperature—with the structure shown in Fig. 1c being favored as it is heated. The team is now investigating compounds with two iron groups—they exhibit two-step protonation behavior and may have interesting valence tautomerization properties. 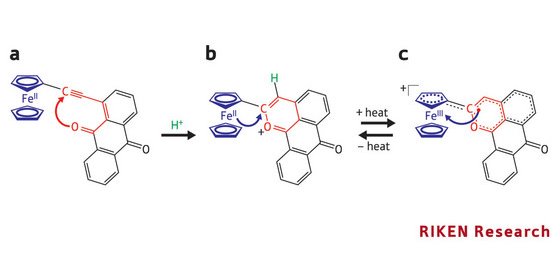 Figure 1: (a) When the molecule is treated with acid (H+, green), a cyclization reaction occurs in which a bond forms between the carbon and oxygen atoms, shown in red, to make a six-membered ring (red) to produce a new compound (shown in Fig. 1b). (b) The Fe ion in the ferrocene group (blue) is now able to transfer one of its electrons to the red ring (blue arrow)—and is oxidized from Fe(II) to Fe(III)—to give the structure shown in Fig. 1c. (c) The donated electron is shown as a red dot. This process is reversible, and the electron can hop back to the ferrocene group (blue arrow) to reform the compound shown in Fig. 1b. The reorganization of the electronic structure depends on temperature; the structure in Fig. 1c is favored as it increases from 12 to 290 K.