Lasing on the spot

Lasing from ‘artificial atoms’ is demonstrated for the first time 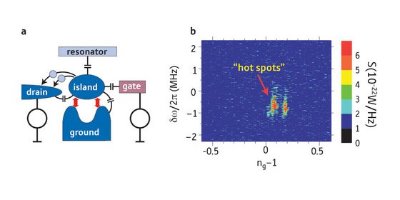 Figure 1: The artificial atom laser. (a) The design of the laser based on a superconducting ‘island’ made from a small dot of aluminum. The break up of the superconducting electron pairs (blue dots) releases energy into the resonator where laser light is generated. (b) Two spots of laser radiation generated by the device. © Nature/Nature Publishing Group/449/588 (2007)

Researchers from RIKEN’s Frontier Research System in Wako, in collaboration with the NEC Nano Electronics Research Laboratory in Tsukuba, have realized the first laser made from ‘artificial atoms’ based on a superconducting electronic device.

Reporting in the journal Nature1, the researchers have now demonstrated a laser that is based on a single artificial atom and has no lasing threshold. In contrast to conventional lasers, “the strong coupling between the artificial atoms and the cavity enables a new lasing regime where one atom produces many light particles,” notes Oleg Astafiev from the research team.

At the heart of this new laser is the artificial atom that is made from a small superconducting aluminum ‘island’ (Fig. 1). This island is coupled to a reservoir, which is used to tune its properties and thus optimize the laser. When a small electrical voltage is applied to the island, the pairs of electrons that form the superconducting state are forced to break up and leave the island through the drain.

The energy that is released by breaking up these pairs is converted into light and fed into the resonator cavity. Contrary to conventional lasers, the coupling between the island and the resonator is very strong, so lasing is achieved immediately and without any threshold. This process of light generation can be repeated many times such that a single atom creates many photons for the laser.

The artificial-atom laser offers a number of opportunities. In particular, “this laser may be used to study the fundamental physical properties of this simplest of possible laser systems, consisting of only one atom,” comments Astafiev. Furthermore, the small amount of power required to achieve lasing in this system could lead to the development of arrays of these small and compact lasers on a single computer chip.