RIKEN researchers have shown that electron beams, like light, can be twisted into vortices that have useful functions 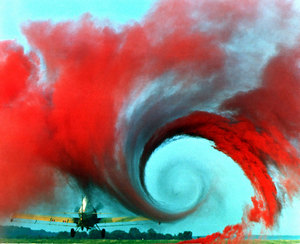 Figure 1: A classical aerodynamics vortex with twisting red smoke produced by a rotating airplane. Quantum analogs have been made with light, and are now proposed for electron waves. Copyright © NASA 2007

Recently scientists discovered that light can be twisted like a corkscrew around its direction of travel. This unusual quantum feature allows photons to whirl around in a vortex, even when no external force is applied to the beam. Now researchers from the RIKEN Frontier Research System in Wako have shown that the same kind of vortices can be produced in beams of electrons1, promising novel applications.

“When a light or electron beam is twisted, waves at the central axis cancel each other out forming a dark core, like at the eye of a storm (Fig. 1),” says RIKEN scientist Franco Nori, also with the University of Michigan in the USA. His RIKEN collaborator Sergey Savel’ev, also at Loughborough University in the UK, adds: “As the photons or electrons spin around the axis, they carry orbital angular momentum that can rotate an electric dipole.”

To explain these properties, the researchers solved the Schrödinger equation of quantum mechanics for a twisting beam of electrons. This produced new dynamical equations that are highly analogous to those found for light. The similarities arise because the twisting angular momentum of the electrons interacts with their forward motion in the same way that intrinsic angular momentum (spin) interacts with the motion of photons, which is known as spin-orbit coupling.

The theory implies that vortices in electron beams have all the features of optical vortices. This reinforces the famous concept of wave-particle duality, which states that all particles have a wave associated with them. More importantly, it means that the useful applications of optical vortices could be replicated at much shorter wavelengths.

In practice, optical vortices can be made by passing a laser beam through a fork-shaped computer generated hologram. Electron-beam vortices could be produced in a similar fashion, using a thin crystal plate with a dislocation. Such vortices could power tiny nanomotors and nano-engines, or could be used in telecommunications by storing information in the optical vorticity, or the intensity of twisting. The vorticity is robust against perturbations, so this potential future technology could reduce the loss of information during optical communications.

Furthermore, electron vortices are predicted to cause a shift of the electron beam at right angles to an electric field. “The unique electron microscope developed by Akira Tonomura's group, also at RIKEN, could observe this unusual effect,” says Nori. “Such work would considerably expand the textbook analogy between matter and waves which Tonomura helped to establish in pioneering experiments.”