As a consequence of the wave nature of light, the minimum spot size a light beam can be focused for use in optical instruments corresponds approximately to its wavelength. Now researchers at RIKEN’s Advanced Science Institute (formerly the Discovery Research Institute) in Wako, in collaboration with researchers from Osaka University, have developed a new microscopy method based on conventional fluorescence microscopes that is easy to use and allows for almost arbitrary enhancements in imaging resolution beyond the classical limit. 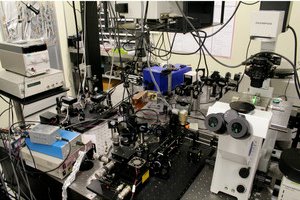 Figure 1: High-resolution imaging can be achieved by a conventional optical microscope (right). Fluorescence from the sample is excited by a green laser (visible at the object holder). The laser is modulated at a certain frequency. The higher harmonics of this frequency are used for super-resolution imaging. The left part of the image depicts the modulation and detection apparatus.

The operation of classical optical instruments is limited by diffraction, a phenomenon that occurs by the bending of light waves caused by obstacles in the light beam. Diffraction originates from the interference of the different light paths reflected from the obstacle, and as such is a direct consequence of the wave properties of light.

Since the limits to imaging resolution are related to the wavelength of light, shorter wavelengths have to be used to achieve high spatial resolution. For example, in the semiconductor industry, the lithographic patterning of increasingly smaller devices necessitates the use of extremely short wavelengths in the ultraviolet region of the spectrum.

However, the use of shorter wavelengths is not always an option, particularly for imaging, and a number of other techniques—beyond those used in classical optics—have been developed to achieve a much higher spatial resolution. This is because the diffraction limit is merely a consequence of the wave nature of light rather than a fundamental law.

One well-known example is scanning probe microscopy, where a sharp tip scans the surface of a material and allows for imaging with atomic resolution. However, many of the techniques that achieve ‘super-resolution’ suffer from practical drawbacks: scanning probe microscopy, for example, requires a close contact with the sample, and therefore only allows for planar imaging.

The new microscopy technique developed by the Japanese research team, led by Osaka University’s Katsumasa Fujita and RIKEN’s Satoshi Kawata, is practical and offers super-resolution beyond the diffraction limit. “The major advantage of our method is that no special skills are required to achieve super-resolution,” says Kawata emphatically.

Published in the journal Physical Review Letters1, the team’s technique is based on the fluorescence that a sample emits under optical excitation by a laser beam matched to the excitation energy of the sample. In biological imaging small fluorescent molecules are used to mark processes within a cell. This emission is collected by a standard optical microscope (Fig. 1).

Although powerful instruments such as the electron microscope can achieve a much higher imaging resolution, they are unsuitable for biological imaging because the high-intensity electron beam damages the samples. An optical microscope, however, allows continuous three-dimensional imaging of biological processes from inside a living cell, without damage to the sample.

In order to detect small fluorescent signals and therefore enable high spatial resolution using laser fluorescence microscopy, the beam intensity of the excitation laser has to be increased. However, if excitation intensities are too high, the light emission from the fluorescent markers saturates. Similar to an overexposed photograph, details of the sample structure are lost in the bright emission. 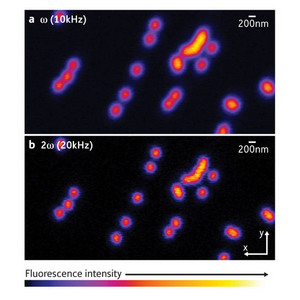 Figure 2: (a) A conventional microscope image of small fluorescent peaks excited with light modulated at a frequency ω of 10 kHz. (b) If the detection frequency is twice the original frequency, a much better resolution is achieved. Reproduced with permission from Ref. 1 © 2007 by the The American Physical Society

The method developed by the researchers now turns this disadvantage into an advantage. Although a saturated emission is too bright to be suitable for conventional microscopy, it also carries components that the researchers have used for super-resolution imaging.

Fujita, Kawata and colleagues modulated the optical excitation of the specimen by the excitation laser at a certain frequency. The emission from the fluorescent molecules follows this modulation and oscillates at the same frequency. At sufficiently high emission intensities, the molecules also emit light at multiples of this fundamental frequency, the so-called overtones or higher harmonics.

Theoretically, the imaging resolution by this method is without bounds. As higher and higher harmonics are used, the better the spatial resolution of the system becomes. The only limit to this method is the increasingly lower fluorescence intensity at the higher harmonic frequencies that eventually becomes impossible to detect against the noise level of the detector.

Therefore, to further improve the detection limit, the signal-to-noise ratio of the detector needs to be improved. Indeed, Fujita asserts that “in this work, we used a very slow modulation frequency. To further suppress the noise level we just need to increase the modulation frequency of the excitation laser beam to enhance the high-resolution component.” Changes to the imaging apparatus itself may also bring significant improvements in the detection of low signals, and further increase resolution.

Kawata is convinced that this practical method will have a big impact on biology and biomolecular sciences, since researchers require three-dimensional images of samples with nanometer resolution. A particular advantage of this approach is that this method is a straight extension of conventional fluorescence microscopy. Unlike more complex alternative approaches based on a sophisticated apparatus, no special skills are required to operate high-resolution microscopy instruments. Efforts are underway to commercialize this technique. 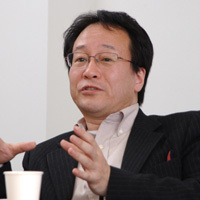 Satoshi Kawata received his BSc, MSc, and PhD, all in Applied Physics, from Osaka University, Japan, in 1974, 1976, and 1979, respectively. In 1979, he joined the Electrical Engineering Department of the University of California, Irvine, as a research associate, and then in 1979 he became a faculty member of the Department of Applied Physics, Osaka University. Since 1993, he has been the professor for Applied Physics at Osaka University and the director of the Photonics Advanced Research Center of Osaka University. Since 2002, he has been working for RIKEN as head of the Nanophotonics Laboratory and as chief scientist. He is an editor for Optics Communications, ex-president of the Spectroscopical Society of Japan, and a fellow of SPIE, OSA, and IOP. His research interests include nanophotonics, plasmonics, biophotonics, and spectroscopy. He was awarded a number of prizes, including the medal with purple ribbon.