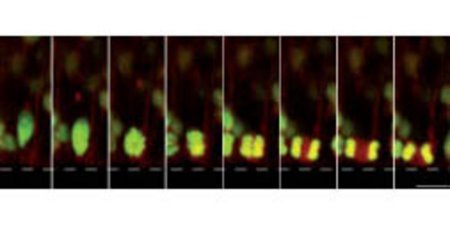 New findings indicate that the way in which the contents of progenitor cells called neuroepithelial cells are distributed during division strongly influences the fate of the resulting progeny. During division, the mitotic spindle is responsible for separating and allocating chromosomes into daughter cells. The spindle position dictates the orientation of the plane through which the parent cell will split.

A team led by Fumio Matsuzaki at the RIKEN Center for Developmental Biology in Kobe conducted experiments to find out whether mitotic spindle orientation influenced the fate of neuroepithelial progenitors, as these cells are highly polarized with two distinct regions referred to as apical and basal endfoots. Their work was recently published in Nature Cell Biology 1.

By tracking the positions of fluorescently labeled chromosomes in neuroepithelial progenitors in developing mouse forebrains, the researchers noted that the majority of divisions were symmetric, or planar, along the plane perpendicular to the apicobasal axis (Fig. 1). To manipulate mitotic spindle orientation in neuroepithelial progenitors, the team ablated and enhanced expression of the proteins LGN and mInsc, respectively; both LGN and mInsc can shift spindle positioning.

Deletion of LGN and over-expression of mInsc resulted in asymmetric division occurring parallel to the apicobasal axis, and unequal distribution of apical and basal endfoots. Detailed study of individual dividing parent cells revealed that inheritance of both apical and basal endfoots was essential for adoption of the parental progenitor fate. Daughter cells inheriting either the apical or basal endfoots assumed the fate of cells on their way towards differentiating into neurons.

Future study is needed to identify the cellular ‘cargo’ localized in the apical and basal endfoots of neuroepithelial cells that is required to bestow upon daughter cells a parental neuroepithelial progenitor cell destiny.

“There has been long-lasting controversy regarding mitotic spindle orientation during neuroepithelial progenitor divisions,” says Matsuzaki. “Our study provides a firm answer to this issue, and raises the fundamental question of how neurons are born from these planar divisions.”