Analogue of a biologically vital molecule will help medical studies 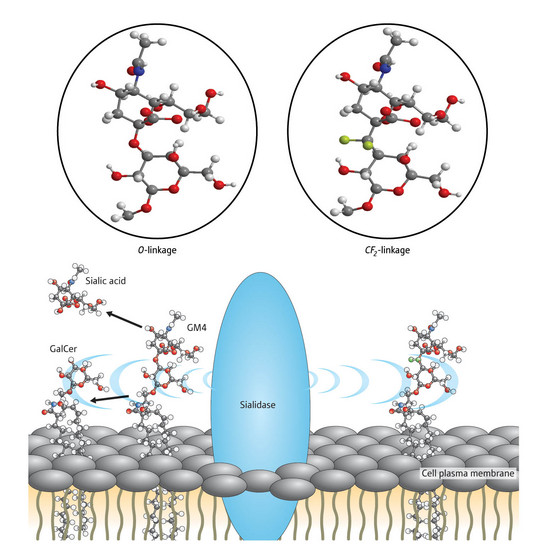 Figure 1: Sialidase splices natural gangliosides at their oxygen linkage but analogues made with a difluoromethylene (CF2) linkage are stable. © 2008 Go Hirai

Japanese chemists have synthesized a robust version of a biologically important molecule that is naturally unstable so difficult to use experimentally. The natural form of the sugar- and lipid-based molecule, called ganglioside GM4, is found abundantly in the body, but without a chemically and biologically stable analogue of the molecule, researchers are yet to fully clarify its physiological roles.

One of over 40 known gangliosides, GM4 sits in the cell plasma membrane and is thought to be involved in cell recognition and transmission of chemical messages across the cell surface. Medically it is of great interest as gangliosides appear to be attacked in patients with certain autoimmune neurodegenerative disorders, such as Guillain Barré syndrome, and seem to be metabolized at a higher rate in cancer cells.

Researchers have grappled with studying the molecule because it is broken down very quickly to sialic acid and the molecule named GalCer by an enzyme called sialidiase. Sialidase cleaves the natural ganglioside molecule at a point where an oxygen atom links two parts of the structure together (Fig. 1). Carbon attached to two fluorine atoms (CF2) offers a good substitute for oxygen however and can easily sit in the oxygen's place, making this linkage point resistant to the enzyme's splicing action.

The team of chemists from several Japanese institutes, led by Mikiko Sodeoka from the Advanced Science Institute, formerly the Discovery Research Institute in Wako, set out to synthesize a biologically active, but sialidase-resistant analogue of GM4, using this CF2 substitution as the basis for the structure of the mimic. The team developed a strategy to synthesize the sialidase-resistant molecule that involves the Ireland–Claisen rearrangement, a reaction that breaks carbon-oxygen bonds and forms carbon-carbon bonds simultaneously.

Published recently in the Journal of the American Chemical Society1, the new method offers a high level of stereoselectivity, which is the ability to choose specific arrangements of atoms. This was important because using CF2 instead of oxygen means a very specific orientation of the molecule is required in order for the atoms to fit together correctly in space. Efficient and controllable production of the imitation ganglioside was enabled by this method of synthesis.

Biological experiments using the new molecule are already underway to determine why gangliosides are degraded more quickly in cancer cells. The strategy used to synthesize GM4 promises to allow other forms of ganglioside to be copied. The team wants to produce a CF2 linked analogue of ganglioside GM3 next, which may prove even more useful in determining the role of these molecules, says Sodeoka.