Superfluidity in one and three dimensions 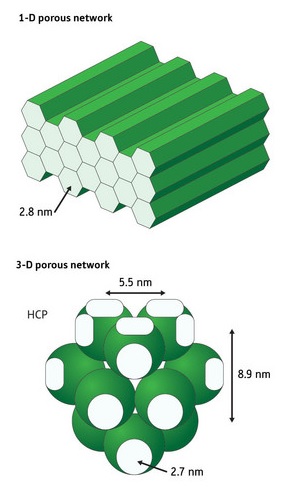 Figure 1: Illustration of the structure of the 1- and 3-D nanoporous networks used to explore the role of dimensionality on a superfluid phase transition.

Thermal and quantum mechanical fluctuations usually have little effect on the behavior of a system when its constituent particles are free to move in all three dimensions. Consequently, theoretical models for describing the transition of a bulk 3-D system from one phase to another usually ignore these fluctuations. But as the dimensionality of a system is reduced, fluctuations become increasingly important.

To better understand such effects a team of Japanese researchers, including Hiroki Ikegami of RIKEN’s Discovery Research Institute in Wako, has investigated the behavior of helium-4 in two different nanoporous materials1—one consisting of an unconnected array of 2.8 nm-wide 1-D channels, and the other of a periodic network of 2.7 nm-wide pores connected in 3-D (Fig.1). Significantly, the team made the size of the pores smaller than the characteristic wavelength of thermal vibrations, known as phonons, in the liquid.

The transition of a 3-D liquid to superfluid behavior, as it is cooled below its critical temperature, is usually accompanied by the appearance of superfluid density and an abrupt change in heat capacity characteristics. But for helium-4 adsorbed within a 1-D porous network, the team has found that the superfluid density appears at a much lower temperature than the kink in its heat capacity. The team believes this is caused by thermally excited vortices that induce breakdown of long-range order in helium-4, as has previously been seen in superfluids in 2-D.

“The helium atoms adsorbed on the walls of our nanopores act like a cylindrical 2-D system,” explains Ikegami. “In a 2-D superfluid, fluctuations are significant, and destroy the macroscopic order. So, the temperature at which the macroscopic order appears, indicated by the appearance of superfluid density, is much lower than the one at which the local order appears, indicated by the heat capacity kink.”

More surprising, is that in the team’s 3-D nanoporous network, the kinks in superfluid density and heat capacity occur at the same temperature, similar to a bulk 3-D liquid despite the fact that at a nanoscopic level its shape is essentially 2-D. The team suggests that the similar behavior arises because the network hinders the phonons that might otherwise destroy long-range ordering. Yet there is still work to be done, says Ikegami. “Although our results are very well described by the ideal 3-D theory, we have no basis, at present, to explain why they are described so nicely.”