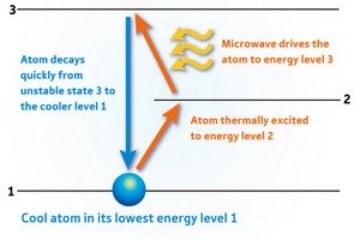 Exploiting some of the bizarre features of the quantum world to process information could lead to computers much faster than current ones. The technology relies on scientists being able to clearly realize one unit of quantum information, known as a qubit, which can be encoded in ‘artificial atoms’ made from superconductors. Now researchers from the RIKEN Advanced Science Institute (formerly the Frontier Research System) in Wako have proposed a method to improve the coherence of a superconducting qubit by simultaneously cooling the qubit and its surroundings1.

Conventional technologies can lower the temperature of a nanoscale device to a few hundredths of a degree above absolute zero. However this temperature is still not quite low enough for some quantum devices that require extremely quiet environments free from thermal agitations.

Recently scientists in the US2 managed to lower the temperature of a superconducting qubit to two orders of magnitude lower than its surroundings. Their method involves cooling the qubit by transferring it between energy states.

“The only problem with this method is that, while the superconducting qubit is greatly cooled, the noise sources surrounding the qubit are not, so the qubit will quickly warm up again,” explains RIKEN visiting scientist Jianqiang You, also with Fudan University, Shanghai, China. “The new challenge is to maintain the qubit in the cooled state.”

The proposed method also considers a tunable qubit that can be kept in the unstable high-energy state for some time to resonantly interact with the noise sources surrounding the qubit. Thereafter, both the qubit and its neighboring noise sources can be cooled simultaneously. This will significantly enhance the quantum coherence of the qubit because it will take a relatively long time for the cooled qubit to be thermally activated again.

In practice, there are different types of quantum noise. The team’s theory gives similar results for two different noise sources, implying that the cooling could be robust and effective in many surrounding environments. The technique could be applied for cooling mechanical resonators at the nanoscale, providing opportunities to observe the transition between classical and quantum resonant behavior.