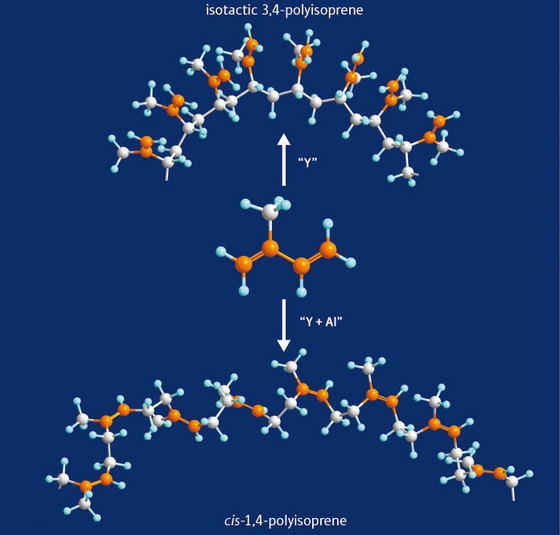 Researchers from the RIKEN Advanced Science Institute in Wako, using a rare earth-based catalyst, have produced a novel polymer or chain of isoprene molecules with unique properties. In addition, much to their surprise, they found their polymerization system can be dramatically switched, simply by adding an aluminum-based compound, to produce a different isoprene polymer which is the main component of natural rubber.

The two polymers vary in which of the carbon atoms of the four-carbon isoprene molecules connect together to form the chain. The rubber chain (1,4-cis polyisoprene) is formed by joining the two end carbons of the isoprene molecules, whereas in the new polymer the molecules are joined at two adjacent carbons in a particular three-dimensional arrangement (isotactic 3,4-polyisoprene) (Fig. 1). It leaves the other two carbon atoms double-bonded on a side chain all along the same side of the main or polymer chain, a construction which allows a range of groups with different chemical functions to be added easily. The researchers are collaborating with a chemical company on employing this facility to transform 3,4-polyisoprene into further useful polymers.

The research group has been exploring how catalysts based on rare-earth metals—a group of elements which includes scandium, yttrium and the lanthanides—can be used to produce high-performance synthetic rubber1. “We need a chemical way to produce rubber,” says project leader Zhaomin Hou. “Not only is the natural supply limited, but a big advantage of chemical synthesis is that it allows us to modify the properties of rubber in the laboratory.”

In their latest paper published in Angewandte Chemie International Edition 2, the researchers discuss their work with a catalyst made up of an yttrium ion with bulky nitrogen-based groups called amidinates attached. The shape of the catalyst restricts the polymerization reaction to the two adjacent carbons at positions 3 and 4 in the isoprene molecule. The result is the new polymer 3,4-polyisoprene. But when they added trimethyl aluminum (AlMe3), widely recognized as a co-catalyst which can potentially increase the activity of the catalyst system, they found the reaction began to change.

At levels below two AlMe3 molecules to one catalyst molecule they were still producing 3,4-polyisoprene, but by five AlMe3 molecules to one catalyst molecule, 98% of their product was rubber (1,4 cis-polyisoprene). “The finding that an aluminum alkyl compound can switch the selectivity of isoprene polymerization suggests that we should reconsider the role of aluminum compounds in such catalyst systems,” Hou says.