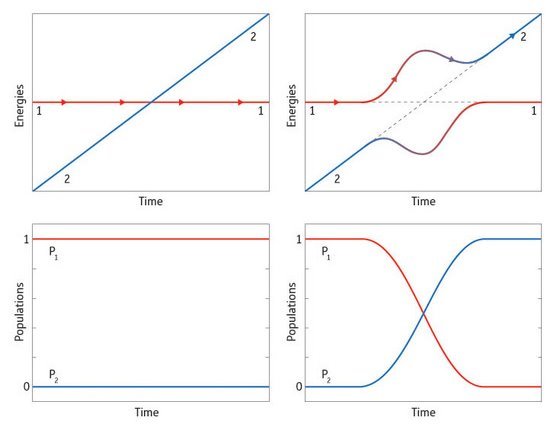 Figure 1: The slow and robust transfer of a qubit from one quantum state (1) to another (2). The temporal evolution of the energy levels (upper panels) and the populations of those energy levels (lower panels) are shown for a two-state quantum system. The population transfer from one quantum state to another occurs only in the circuits with an electromagnetic (coupling) pulse (right-hand panels).

Over the past decade scientists have made rapid progress towards building a quantum computer, but many obstacles still remain. One important requirement is that researchers must achieve extremely accurate control of the electrical signals used in quantum logic gates. A research team based at the RIKEN Advanced Sciences Institute (formerly the Frontier Research System) in Wako has proposed a new method for operating quantum logic gates that could help reach the required accuracy1.

Calculations in quantum computing are performed on units of quantum information called qubits, which can be implemented in superconductors. The slightest noise or interference from the external world can cause qubits to lose their quantum information and revert to classical behavior. This problem, known as decoherence, has been partly overcome by ‘adiabatic’ quantum computing in which the quantum algorithm is designed to keep the whole system in a relatively robust state throughout the calculation.

The quantum algorithm is not changed in the new proposal. Franco Nori of RIKEN and the University of Michigan in the USA, explains: “The only thing that has changed is the way that the gates are operated. Instead of using so-called pi-pulses, which require very accurate electrical signals to manipulate the qubits, we propose using slow population transfers, which are not affected by imperfections in the manipulation signal.”

The qubits must still be very accurately controlled, but now the strict requirement is shifted to a different step in the quantum gate, sometimes referred to as the phase gate. This step is easier to perform than the population transfer. Thus, the strictest accuracy requirement is now imposed on a step where the available technology allows accurate design.

“When you manipulate quantum states slowly, nature works on your side and protects the quantum state against imperfections in the control signals,” says Lian-Fu Wei of the RIKEN team, now at Southwest Jiaotong University in Chengdu, China.

Team-member Sahel Ashhab summarizes the approach by saying: “We identified a difficulty in the requirement of accurate control pulses and asked the question: can we perform quantum gates without having to deal with this?” The theoretical analysis has shown that it is indeed possible to do so, and the researchers hope that experimental tests of their idea will be performed in the near future.