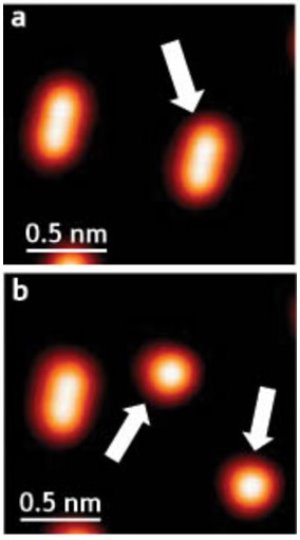 Figure 1: Splitting molecules. (a) Individual dimethyl disulfide molecules appear as ellipses in these STM images; (b) after injecting an electron, the molecule splits apart into two methyl sulfide fragments. Modified with permission from Ref. 2 © 2008 by the American Physical Society

RIKEN scientists have developed a method to control and study a chemical reaction in a single molecule. The technique could eventually help to fabricate advanced electronic devices molecule by molecule.

Chemistry involves moving the electrons in chemical bonds around to create new arrangements of atoms, and firing an electron at a molecule is one way to trigger that reaction.

Scientists such as Yousoo Kim of RIKEN’s Advanced Science Institute, Wako, use scanning tunneling microscopes (STMs) to study these reactions in more detail1.

Normally used for taking atomic snapshots, an STM contains a sharp conducting tip that delivers electrons to jump a few billionths of a meter onto a nearby surface. But these electrons can also be used to trigger chemical reactions, causing target molecules to vibrate until they fall apart.

Kim and his colleagues, led by RIKEN’s Maki Kawai and including collaborators from the University of Tokyo and Osaka University, have now shown that a chemical bond can be broken apart in this way by exciting different bonds in the same molecule2.

“This is the first observation of an indirect pathway of bond breaking, which demonstrates the effective energy flow between two different vibrational modes,” says Kim.

The scientists studied how molecules of dimethyl disulfide (CH3S–SCH3) on a copper surface split into two methyl thiolate (CH3S) fragments (Fig. 1), and found that vibrations in the carbon–hydrogen bond, induced by an STM electron, could drive the reaction.

“The fact that we can utilize a new, indirect pathway to induce bond breaking could provide wider approaches for controlling and identifying surface chemical reactions,” adds Kim.

The STM’s electrons can also induce the methyl sulfide fragments to hop around on the copper surface. “This provides practical way to form a self-assembled monolayer of CH3S molecules in a controlled manner—it is molecule by molecule assembly,” explains Kim.

The choice of dimethyl disulfide was significant, according to Kim. Similar sulfur-based compounds are widely used to create self-assembled monolayers—just one molecule thick—by breaking apart the sulfur–sulfur bond. Self-assembled monolayers on metal surfaces are showing promise as starting points for molecular-scale electronic devices.

“The most significant part of the present work is that these dynamic process—bond breaking and lateral hopping motion—can be induced in a controllable way by tuning the energy of the injected tunneling electrons,” says Kim. “This will provide a possible general basis for designing the architecture of molecular electronics.”