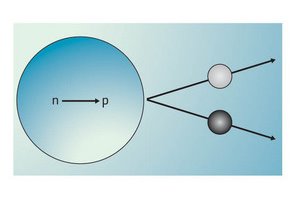 Figure 1: In nuclear beta decay, a neutron (blue sphere) emits an electron (light grey) and a massless particle called a neutrino (dark grey). In so doing, the neutron turns into a proton.

An international team of scientists from RIKEN at Brookhaven National Laboratory (BNL) and elsewhere in the USA, Japan and the UK are testing the Standard Model—the foundation of high-energy physics that unifies three of the four known forces found in nature—by calculating a well-known nuclear decay process1.

Summarizing the work, Thomas Blum, a member of the team, says: “We want to understand the structure of the particles in the nucleus from the standpoint of the Standard Model, in general, and quantum-chromodynamics (QCD), in particular. QCD is the theoretical basis for the strong force between quarks, the particles that make up neutrons, protons and other particles that are the building blocks of matter in our universe.”

Most of the predictions of the Standard Model, which was developed in the 1960s, can only be tested at high-energy particle accelerators, such as CERN in Switzerland, or the Relativistic Heavy Ion Collider (RHIC) at BNL in the USA. In contrast, beta decay in radioactive nuclei is a well-known process that can be measured, extremely accurately, with a simple experimental set-up. Beta-decay occurs when a neutron emits an electron and a massless particle called a neutrino (Fig. 1). In so doing, the neutron turns into a proton.

Blum and colleagues calculated the part of the decay rate of the neutron that depends on QCD, using a numerical method called ‘lattice gauge theory’ in which each point on a grid corresponds to a point in space–time. By solving the problem on successively finer grids, the calculations approach the true ‘continuum limit’ of the real world. The state-of-the-art calculations were made possible through the use of the QCDOC supercomputers at Columbia University, the RIKEN BNL Research Center, and the University of Edinburgh.

Most implementations of lattice gauge theory correspond to three spatial dimensions and one time dimension, but Blum and his colleagues use a ‘mathematical trick’ called ‘domain wall fermions’. They perform their calculations in four space dimensions—only reducing their answer back to the three-dimensional world at the end. The trick allows the group to capture important physics that most three-dimensional theories cannot.

An important aspect of the work lies in being able to test a sophisticated numerical technique that is consistent with the Standard Model and QCD against a simple result—neutron beta-decay. Confirmation that their results are accurate gives theorists the confidence to pursue increasingly complex problems in particle and nuclear physics.