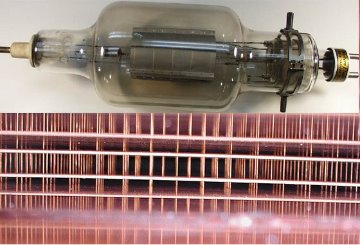 Figure 1: A backward wave oscillator (top), which generates microwave radiation by passing an electron beam through a ‘slow-wave structure’. Similar devices could incorporate man-made metamaterials, or ‘left-handed media’ (bottom) in place of the slow-wave structure to generate tuned visible or infrared radiation.

A team at the RIKEN Advanced Science Institute in Wako has predicted that man-made structures called metamaterials could produce instabilities in electron beams1. The effect could provide new methods for generating and amplifying optical signals.

Metamaterials are often known as left-handed media (LHM) because they break the right-hand rule of electromagnetism. This means that the ‘envelope’ of a wave—created by changes in wave height—in LHM can move in the opposite direction to the wave’s overall motion. This is expected to produce phenomena similar to backward wave oscillators, which are common sources of microwave radiation (Fig. 1).

“Any system that contains two oppositely directed fluxes of information can be unstable if the coupling between the information carriers (waves and electrons in our case) is strong enough,” explains RIKEN scientist Yuriy Bliokh, also at Technion-Israel Institute of Technology in Haifa.

The coupling between carriers in LHM is provided by Cherenkov radiation—a type of radiation emitted when a charged particle passes through an insulator at a speed faster than the speed of light in the insulator. It is responsible for the blue glow in nuclear reactors, and propagates from a particle beam just like the wake from a moving ship.

In LHM, Cherenkov radiation moves backwards, providing strong feedback for particles moving behind. In particular, two electron beams side-by-side could excite each other via their Cherenkov radiation, producing unstable, chaotic motion in the beams.

To investigate these effects, Bliokh and RIKEN co-workers Sergey Savel’ev, also at Loughborough University, UK, and Franco Nori, also at the University of Michigan, USA, developed a model which solves the equations of motion for two electron beams passing through LHM, and calculates the total electric field generated. "Small perturbations in the beam density were introduced to represent fluctuations that can occur in the real world," says Savel'ev.

The small perturbations developed into large instabilities, causing the beam to excite itself. "The behavior resembles beam instabilities that have been discovered in both plasma physics and microwave electronics," says Nori, and could have several applications if a suitable LHM can be realized in the laboratory.

“From my point of view, the most interesting applications would be in the short-wavelength (infrared, visible light) range, because there are already so many devices in the microwave frequency band,” says Bliokh. “This effect could provide tunable sources of regular or stochastic radiation. Also, when the beam current is low, the instability is not developed and the system could be used as an amplifier.”