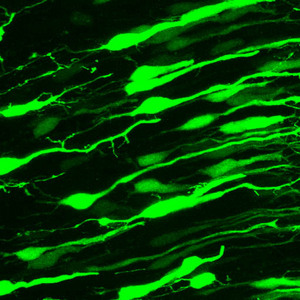 Figure 1: Neurons forming connections at embryonic day 19 in rat brain, as visualized by expression of green fluorescent protein. Prolonged activity in these neurons induces production of Plk2, a regulator of synaptic homeostasis.

Repetition is essential for acquisition and retention of new information and skills, whether one is learning to count to ten in a foreign language or dance the tango. Training induces rewiring of neurons in the learning and memory centers of the brain based on the degree to which they are actively in communication, a property known as synaptic plasticity.

“Synaptic plasticity results in changes in synaptic strength that depend critically on the correlation of activity between pre- and postsynaptic neurons,” explains Morgan Sheng, formerly of the RIKEN-MIT Neuroscience Research Center but now at the Picower Institute for Learning and Memory, MIT, in Cambridge, USA. “If they act in correlation, those connections are strengthened. Conversely, consistent failure of presynaptic inputs to drive the postsynaptic cell results in weakening of those connections.”

Mechanisms exist to keep this plasticity in check and prevent uncontrolled synaptic hyperactivation or deactivation, but these ‘synaptic homeostasis’ processes remain poorly understood at the molecular level. However, new research from Sheng’s team, led by graduate student Daniel Seeburg, has provided a promising breakthrough on this front.

Previous research from Sheng’s group focused on SPAR (spine-associated RapGAP), a protein that stimulates growth of dendritic spines—the projections through which postsynaptic neurons receive their signals. They found that prolonged activity in postsynaptic neurons induces production of Polo-like kinase 2 (Plk2; Fig. 1), a protein that triggers SPAR degradation and spine depletion1. “We thus formed the hypothesis that Plk2 might be part of a negative feedback mechanism,” he says.

Their new work reinforces this hypothesis2. The team treated cultured neurons from the hippocampus—the brain’s learning and memory center—with a drug that typically induces prolonged synaptic firing, followed by inhibition through homeostatic mechanisms. However, blocking Plk2 reduces this inhibition. The researchers subsequently found that SPAR undergoes a chemical modification that primes it for interaction with Plk2 and subsequent degradation. Eliminating this modification blocks Plk2 binding, stabilizes SPAR, and undermines synaptic homeostasis, resulting in excessive synaptic activity.

Sheng’s group hopes to generate mouse strains in which Plk2 activity is eliminated or dramatically elevated to assess the role of homeostatic plasticity in brain development and the learning of basic tasks. Beyond shedding light on a mysterious neurological process, their findings could also have direct clinical implications. “An important function of homeostatic activity is preventing both inactivity and pathologically high activity, i.e. [epileptic] seizures,” he explains. “Defining the mechanisms that normally provide negative feedback regulation during periods of abnormally high activity may help us to understand what goes wrong in the brain during epileptogenesis.”