A third player, with links to nutrient levels, is involved in controlling the growth form of plants 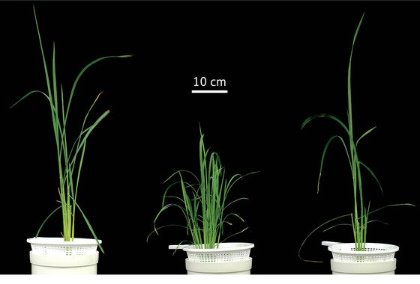 A RIKEN-led research group has uncovered another class of plant hormones involved in regulating shoot branching. The identity of the compounds suggests a means by which plant form can be linked to the level of nutrients in the soil.

The compounds, the strigolactones, are well known as exudates of plant roots. In the soil, they communicate biochemically with the symbiotic fungi which assist in the uptake of nutrients, and they also stimulate germination of the seeds of plant root parasites such as Striga and Orobanche. Greater understanding of the way in which the strigolactones inhibit branching, and of how they interact with soil organisms could lead to the development of protection against root parasites and better control of plant architecture.

It has long been known that branching is controlled by two other classes of hormones: the cytokinins, which promote cell division, and the auxins, which are produced at the tip of a growing stem and inhibit nearby shoot buds. But work by other researchers using genetic mutations that lead to increased branching suggested a third class of compounds, acting as branch inhibitors, were also involved. The studies showed these hormones were likely derived from carotenoid compounds, which made the strigolactones a possible candidate.

To verify the involvement of the strigolactones, researchers from the RIKEN Plant Science Center in Yokohama and several Japanese universities used mutants of rice and the plant genetics workhorse, Arabidopsis, to examine the relationship between the proposed branch inhibitor and strigolactones. Their work is detailed in a recent article in Nature 1.

In normal rice, the researchers found that, when inorganic phosphate in the nutrient medium is depleted, increased levels of strigolactone are released by the roots. But in two mutant strains, the levels of strigolactones released by the roots remained low and branching high whatever the status of nutrients. Both mutations were of genes for enzymes potentially involved in synthesizing strigolactones from carotenoids. The addition of a strigolactone analogue to the growth media of the mutant plants inhibited branching in a dose-dependent manner (Fig. 1). The same results were obtained using two similar mutants of Arabidopsis.

Based on this information, the researchers suggest that strigolactones inhibit shoot branching, and that their production is increased when levels of phosphate, and perhaps other nutrients, are low. “The next step is to find and describe the receptors and biochemical pathways for strigolactones in the shoot buds, soil fungi and root parasites,” says Shinjiro Yamaguchi, the project leader.