Warming up to the Casimir force 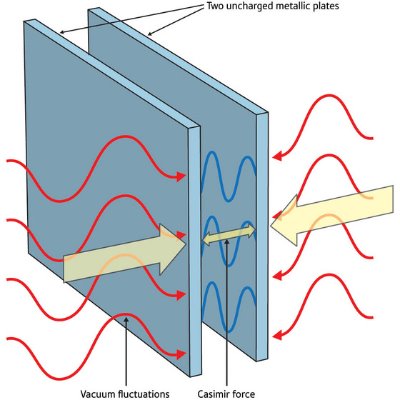 Figure 1: Quantum electrodynamics shows that two uncharged plates in a vacuum will experience an attractive force called the Casimir force, which arises because the plates alter the fluctuations in the vacuum. Copyright © 2008 Yampol’skii and Nori

When two uncharged objects are placed in a vacuum with no external fields, we wouldn’t expect them to have any force between them other than gravity. Quantum electrodynamics says otherwise. It shows that tiny quantum oscillations in the vacuum will give rise to an attraction called the Casimir force (Fig. 1).

Scientists at the RIKEN Advanced Science Institute in Wako, and co-workers at the National Academy of Sciences of Ukraine (NASU), have shown for the first time that the Casimir force has a complex dependence on temperature1. They propose a related experiment that could clarify the theory around this important interaction, which has widespread applications in physics and astronomy, and could eventually be exploited in nano-sized electrical and mechanical systems.

“The Casimir force is one of the most interesting macroscopic effects of vacuum oscillations in a quantum electromagnetic field,” says Franco Nori from RIKEN and the University of Michigan in the USA. “It arises because the presence of objects, especially conducting metals, alters the quantum fluctuations in the vacuum.”

The Casimir force was first predicted in 1948, but has only recently been measured in the laboratory because experiments are difficult—the force is negligible except when the distance between objects is very small. More experiments are needed to understand how the force depends on temperature, an important practical consideration.

“As the temperature increases, metal objects in a vacuum experience two competing effects,” explains Sergey Savel’ev from RIKEN and Loughborough University in the UK. “They lose some of their electrical conductivity, which tends to cause a decrease in the Casimir force. At the same time they are bombarded with more radiation pressure from the thermal heat waves, and this increases the Casimir force.”

RIKEN’s Valery Yampol’skii, who also works at NASU, says that “if these temperature effects were observed in an experiment, they would resolve some fundamental questions about electron relaxation in a vacuum”. Such an experiment would be near-impossible with pieces of bulk metal, but could be done using extremely thin metal films.