Making the switch for DNA 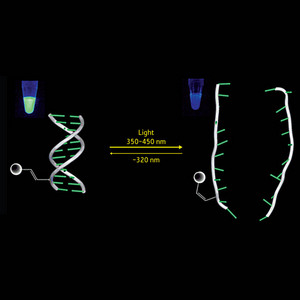 Figure 1: This figure shows the reversible formation and destabilization of a DNA complex by a photochromic nucleoside (PCN) that changes formation under differing light conditions. The changes are monitored by fluorescence. Reproduced, with permission, from Ref. 1 © 2008 John Wiley & Sons

Two RIKEN researchers have developed a switch to control the formation and separation of DNA duplexes that may have implications in many biological processes, such as gene regulation.

Formation of complexes of our genetic building blocks, the nucleic acids, underlies many biological events. Hybridization of the nucleic acids, through interactions known as base pairing, forms the intricate complexes responsible for the formation of DNA duplexes. The ability to control hybridization, and consequently whether biological events take place, is a very important goal for scientists.

Now, Shinzi Ogasawara and Mizuo Maeda at the RIKEN Advanced Science Institute, Wako, have developed a light-controlled switch that directs the formation and destabilization of a series of DNA duplexes1.

They designed the photoswitch, a photochromic nucleoside (PCN), with several fundamental properties and benefits. The switch can be easily incorporated into a DNA strand and its physical conformation can be altered reversibly when irradiated by an external light source. Change of the physical conformation, by isomerization, disrupts and destabilizes the hybridization of two DNA strands. Another benefit of the PCN switch is that installing it into DNA has little influence on the structure of the duplex when it forms. Further, the PCN can be used as molecular trace label because it is fluorescent. This PCN photoswitch is therefore easy to track in the body and could be used in living cells without disruption.

The researchers irradiated a series of reaction mixtures containing PCN-modified DNA duplexes, which were fluorescent, with light at 370 nm for 5 minutes. After this time, only a slight fluorescence was seen. The PCN fragments had isomerized and the duplex broken. They then irradiated the mixtures at 254 nm for 2 minutes and the fluorescence returned, indicating a change back in conformation of the PCNs and importantly, hybridization to re-form the duplexes (Fig. 1). This switching showed good reversibility over two cycles.

Surprisingly, this easy switching system also works below room temperature. Ogasawara is naturally pleased with the current results. “There were no particular problems we had to overcome,” he says. However, the synthesis of the PCNs was not as straightforward as they would have liked.

Ogasawara and Maeda now want to build on the results of this current study. “We plan to apply this technology to gene regulation such as antigene, antisense and siRNA,” says Ogasawara. “We think that this light-switching technique can be applied to nanotechnology, for example [using] light [to] control DNA nanomachines and architectures.”