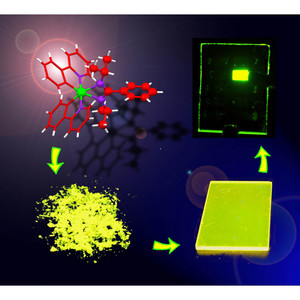 Figure 1: A phosphorescent iridium–amidinate complex (top left) serves as an excellent emitter (bottom), enabling the first successful fabrication of highly efficient non-doped phosphorescent OLEDs (top right). Reproduced from Ref. 1 with permission from the authors and The Royal Society of Chemistry

Organic light-emitting diodes (OLEDs) are set to revolutionize lighting technology, ushering in an era of thin, flexible, and ultra-bright devices. At the heart of recent OLED devices are phosphorescent metal complexes that, when stimulated by an electric voltage, produce a sustained emission of light with higher efficiency than other sources. Furthermore, because OLEDs create their own light, they eliminate the need for backlights used in liquid crystal displays, and therefore consume low amounts of power.

Although the advantages of OLEDs are impressive, manufacturing these devices remains a challenging and expensive process. Phosphorescent OLEDs are normally fabricated by via a process known as ‘doping’ where metal complexes are added into a host matrix under strict concentration requirements. If the metal concentration is too high, the complexes interact and quench each other’s phosphorescent abilities.

Now, a team of scientists led by Zhaomin Hou from the RIKEN Advanced Science Institute in Wako has developed a way to eliminate precise doping limits from the OLED manufacturing process1. By using a metal dopant containing molecular groups that block the self-quenching interactions, the scientists have, for the first time, fabricated high-efficiency OLEDs with a wide range of doping concentrations.

Hou and colleagues modified a phosphorescent iridium metal complex with a class of molecules known as amidinates. These molecules bind to iridium through a nitrogen atom that localizes electrons near the center of the metal complex. Bulky carbon groups on the edges of the complex are inert and prevent the materials from attaching and self-quenching their phosphorescence.

Prototype OLED devices made with the iridium–amidinate complex exhibited a bright yellow-green emission (Fig. 1) using very low driving voltages. The scientists found that a wide range of doping concentrations—from 7% to 100%—could be used to produce the OLED devices.

“One of the research projects in my group led to an efficient synthesis of various amidinates,” says Hou. “We envisioned that a geometrically hindered amidinate group might overcome the problems encountered previously in phosphorescent metal complexes.”

According to Hou, the iridium complex itself possesses charge-transport ability, removing the need for a host matrix. Moreover, because of the excellent performance and the ease of synthesis, the iridium–amidinate phosphorescent complexes should have high potential in practical applications such as flat-panel displays and organic lighting.

“We are now applying the amidinate molecules to phosphorescent metal complexes that emit light at different wavelengths,” says Hou. “This will allow us to produce new high performance OLED devices with different colors.”