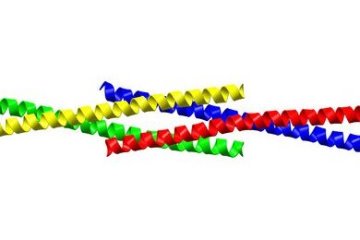 Figure 1: When four Homer protein monomers interact, they form a long tail-to-tail tetramer. The crystal structure of the carboxy-terminal of Homer is shown; each of the four Homer monomers is represented by a different color. Reproduced, with permission, from Ref. 1 © (2009) Elsevier

An international team of researchers, including Mariko Kato Hayashi at the RIKEN Brain Science Institute in Wako, has found that the scaffolding proteins Shank and Homer polymerize to form a large matrix that regulates key features of the synapse1—namely its shape, protein composition, and function.

Chemical communication between neurons occurs at the synapse. Many synaptic proteins—such as neurotransmitter receptors, scaffolding proteins, and signaling proteins—are poised at the receiving end of the synapse, called the ‘postsynaptic density’ (PSD). Increasing the expression of the PSD scaffolding proteins Shank and Homer within neurons increases the size of dendritic spines, in which the PSD is located. These new findings explain why.

Notably, incubation of both Shank and Homer together resulted in a large mesh-like structure, with Shank proteins forming ‘hubs’ which attached to the ends of Homer protein fibers. The formation of this large Homer–Shank matrix within neurons may explain why the dendritic spines of these neurons are abnormally large when these two proteins are artificially expressed at high levels.

Using a technique called x-ray crystallography, which allows scientists to determine the shape of proteins, the researchers were able to establish the structural basis by which Homer forms long filaments: four Homer protein monomers interact in a special crossing tail-to-tail tetrad structure (Fig. 1). Interference with the creation of this structure, by mutating key parts of the tetrad structure, blocks formation of the Homer–Shank matrix.

The team found that expressing this mutant Homer in neurons resulted in abnormal synaptic development and the normal accumulation of Shank and other synaptic proteins was reduced at the synapse. Also, the dendritic spines of these neurons were long and thin, which is characteristic of immature spines. These changes seemed to affect neuronal function, because neurons expressing the mutant Homer protein, which could not form the tetrad structure, had reduced excitatory neurotransmission compared with neurons expressing the normal Homer protein.

“The Homer–Shank matrix could be the structural framework of the PSD,” says Hayashi, “and could work as the platform for other important synaptic proteins. It would therefore be playing a role much like the circuit board of a computer.”